Normal moss: the green leaves are the haploid bodies and the brown stalks are diploid sporophytes.

Bryophytes are simple plants. They are the simplest plants that grow on land. There are three forms of bryophyte. These are mosses, liverworts and hornworts.

Bryophyta is the formal term for this division of plants who do not have tissues to move water. In some modern classifications the word bryophyta only includes mosses. However, the term is still useful because mosses, liverworts, and hornworts share important traits.

A bryophyte begins when its parent plant makes haploid spores that land on the ground. Each spore grows into a leafy gametophyte. This gametophyte is either male or female. Male gametophytes make haploid sperm. Female gametophytes make haploid eggs. Water moves the sperm to the egg. An embryo is made when they join. This embryo is diploid. It grows a tall stalk from the gametophyte. This stalk is often brown. A structure called the sporangium is at the top of the stalk. The sporangium is diploid too. It makes spores that are haploid in a process called meiosis. When the spores land on the ground, the cycle begins again. 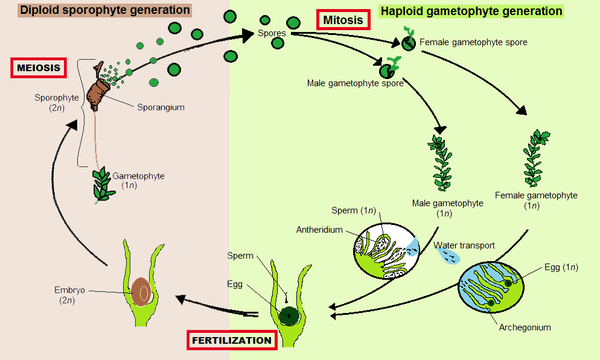 Life cycle of a dioicous bryophyte