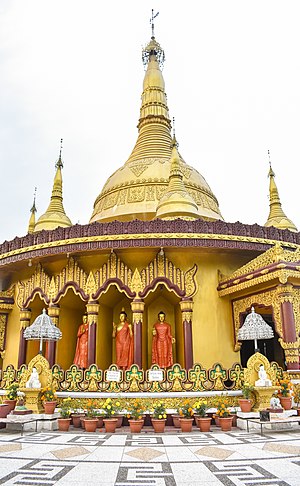 The Buddha Dhatu Jadi (Burmese: ဗုဒ္ဓဓာတုစေတီ; also known as the Bandarban Golden Temple) is a Buddhist temple. It is located close to Balaghata town, in Bandarban City, in Bangladesh. Skandha or Dhatu means material remains of a holy person. In this temple, the relics belong to Buddha. It is the largest Theravada Buddhist temple with the second largest Buddha statue in Bangladesh.[1][2][3]

The Bandaban Golden Temple belongs to the Theravada Buddhism order, which is practiced by the Chittagonian tribal people, a dominant ethnic group of Bandarban. It was built in 2000 in Arakanese architecture, an adoption of South East Asia style.[1][3][4]