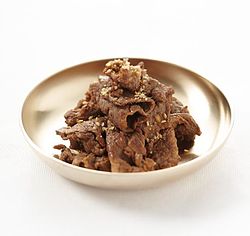 Bulgogi is a Korean dish. It is usually made of grilled beef which has been soaked in sauce for a long time.

Bulgogi is believed to have come from Goguryeo, one of the three kingdoms of ancient Korea. It was called "Maekjeok" at first. In the Joseon dynasty, it was called "Neobiani" which means 'thinly spread'.

There are a lot of essential nutrients in bulgogi. In bulgogi, there are lots of lysine, which is an Essential amino acid. It help children's growth and development.