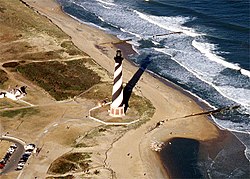 An aerial view of the Cape Hatteras Lighthouse before its 1999 relocation.

Cape Hatteras is a cape on the coast of North Carolina. It is the point that protrudes the farthest to the southeast along the northeast-to-southwest line of the Atlantic coast of North America, making it a key point for navigation along the eastern seaboard. So many ships have been lost around it that the area is known as the "Graveyard of the Atlantic". The nearby shoals are known as Diamond Shoals.

The Cape Hatteras Lighthouse is a well known feature on Cape Hatteras. It was built in 1870 and it is the tallest brick lighthouse in the United States.