This article is about the composer; for the Italian town see Gesualdo. 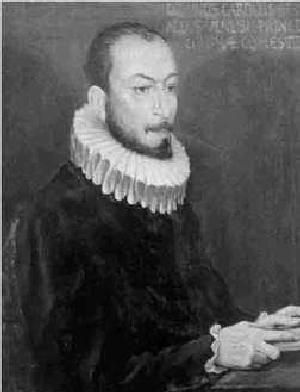 Carlo Gesualdo, known as Gesualdo da Venosa (born probably 8 March 1566; died 8 September 1613), Prince of Venosa and Count of Conza, was an Italian music composer, lutenist and murderer. He lived in the late part of the Renaissance period. He is famous for his beautifully expressive madrigals which are written in a very chromatic style (using lots of sharps and flats). He is also remembered for committing a horrible murder.

Gesualdo came from an aristocratic family. He was probably born at Venosa, but we know hardly anything about his early life. We know that he was extremely interested in music when he was small and showed very little interest in anything else. He played the lute, harpsichord and guitar.

In 1586 Gesualdo married his first cousin, Donna Maria d'Avalos, the daughter of the Marquis of Pescara. For two years her husband knew nothing about her love affair. Then one day he returned unexpectedly to his palace (he may have suspected that something was happening) and found them making love. He murdered them both in their bed. He then left their bodies in front of the palace for everyone to see. In those days in Italy a nobleman could not be arrested and punished. However, someone might have wanted to kill him in revenge, so he ran away to the town of Gesualdo where he had a castle.

A lot of people heard about the murders. Famous poets such as Tasso wrote poems about it. Nothing was done to arrest Gesualdo, however. Some people at the time said that he also murdered one of Maria’s babies because he thought he might not have been the father. Other people even said that he murdered his father-in-law when he came wanting to kill him in revenge, but we do not know whether this was true.

In 1594 Gesualdo went to the town of Ferrara which was famous for music which was being composed by modern composers experimenting with new ideas. He spent two years there and composed his first book of madrigals. There he married another woman who was a niece of Duke Alfonso II d’Este. The couple moved back to Gesualdo in 1597.

Return to Gesualdo, and final years

After returning to his castle at Gesualdo from Ferrara in 1595, he tried to make the town famous for music. He invited some of Italy’s most famous musicians to come and work for him. Since he was very rich he could afford to do this. However, the music making only took place in his castle (printing with Giovanni Giacomo Carlino). Gesualdo spent the last years of his life doing nothing except music. He hardly ever left his castle.

Gesualdo’s new marriage was not a happy one. His wife said he was cruel and she tried to divorce him. She spent a lot of time away from the castle and wrote him angry letters.

Late in life he suffered from depression and madness. We do not know whether this was because he felt bad about being a murderer, but he probably did feel guilty. He often made his servants hit him. He also wrote very strange letters to a cardinal asking him to send him some of his dead uncle’s skeleton because he thought these remains would make him better.

Gesualdo died alone at his castle. The chapel where he was buried was destroyed by an earthquake in 1688. There is still a burial plaque in the rebuilt church.

We think it is likely that Gesualdo felt terribly guilt all his life about the murders he had committed, and these guilty feelings can be heard in his music. The words of his madrigals are often very emotional: they are about "love", "pain", "death", "ecstasy", "agony". Of course, other madrigal composers used such words, but Gesualdo’s music is really extreme. It is often wildly chromatic. Other composers did not copy his style.

He wrote both sacred (religious) and secular (non-religious) songs, and some music for instruments. His most famous compositions are his six published books of madrigals (between 1594 and 1611), as well as his Tenebrae Responsories, which are very much like madrigals, except that they use texts from the Passion story about Christ’s death on the cross.[[Category:Lute