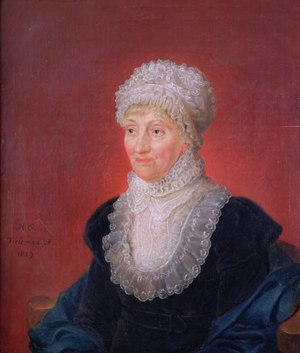 Caroline Herschel (16 March 1750 – 9 January 1848) was a German astronomer who spent most of her life in England. She was the first female astronomer that we know of.[1]

Caroline was born on March 16, 1750 in Hanover, Germany. She was encouraged by her father to get an education. She learnt geometry on her own. She had a hard life because people that she loved died. After her father's death, her brother William Herschel suggested she join him in England. She left Hanover for England on August 16, 1772, with her brother.

In England, Caroline's neighbour taught how to cook, market, and to speak English. This expanded her horizons. William encouraged her to be independent. She signed up to learn how to sing and to play the harpsichord. This led her to being a part of William’s musical shows in small gatherings. Herschel and William discussed astronomy in their free time. This caused her interest to grow. Caroline began including English society in her everyday life. She eventually decided to devote her time to astronomy. This helped William: he needed Caroline’s talents in copying papers.

When they were in England, Caroline helped her brother in his scientific work. She helped him to discover Uranus with a six-foot telescope. William was credited with the discovery of Uranus. He was knighted because of his discovery, and she was his assistant. She recorded and completed tasks for him. Her calculations and record keeping were always accurate. They saved her brother a lot of time. Caroline often worked on discoveries of her own. She independently discovered the second companion of the Andromeda Galaxy (Messier 110; NGC 205) and another, new, nebula. She also discovered eight comets in 1786–1795.[5]

She reworked Flamsteed's Catalogue of Nebulae and Clusters of Stars. The result was published by the Royal Society in 1798 and contained an index of every observation of every star made by Flamsteed, a list of errata, and a list of more than 560 stars that had not been included.[6] In 1825, Caroline donated the works of Flamsteed to the Royal Academy of Göttingen.[7]

She was the first woman to discover a comet. She discovered seven more comets between 1789 and 1797. The comet 35P/Herschel-Rigollet is named in her honor, as well as the lunar crater C. Herschel, and the planetoid (281) Lucretia. She also is famous for her work with her brother. She aided him in his studies. She reorganized John Flamsteed's British Catalogue, which listed nearly 3,000 stars.

Herschel's brother died in 1822 and left her without his financial support. She returned to Hanover after his death and received her stipend from the British Royal Family. She also helped her brother's son finish his father's work.

Toward the end of Caroline's life, she arranged two-and-a-half thousand nebulae and star clusters into zones of similar polar distances. Her nephew, John Herschel, re-examined them systematically. The list was eventually enlarged and renamed the New General Catalogue. Many non-stellar objects are still identified by their NGC number.[8]

Herschel died on January 9, 1848 in Germany. She died at the age of 97. Herschel was never married.

An asteroid was discovered in 1888. It was called Lucretia, Herschel's middle name. Herschel continued to have a legacy after her death because she discovered several comets.