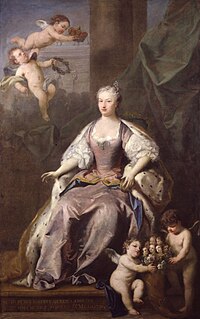 Caroline of Ansbach was the Queen Consort of the Kingdom of Great Britain during the reign of her husband George II of Great Britain. During her time as Queen she had a lot of power.

Caroline of Ansbach was born in Ansbach in Germany, the daughter of Johann Friedrich, Margrave of Brandenburg-Ansbach, and his second wife, Princess Eleanor Erdmuthe Louise of Saxe-Eisenach. Orphaned at an early age, Caroline grew up an intelligent, cultured and attractive woman, and was much sought-after as a bride.

Possible Marriages and Marriage to George

She turned down the King of Spain because it would cause her to renounce the Protestant faith. Shortly after she met the son of the elector of Hanover They married in 1705. Over the next 30 years they had nine children.

George I of Great Britain died 11 June 1727. George Augustus ascended the throne as George II of Great Britain. Caroline held George on a string. When the Prime Minister Sir Robert Walpole met with the King he and Caroline had signs to communicate with each other. George never noticed.

Relations with Frederick, Prince of Wales 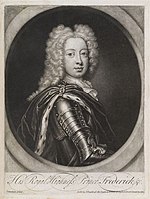 Frederick the Prince of Wales, ca. 1724.
Both the King and Queen truly disliked their eldest son the Prince of Wales. Caroline once called him the Greatest Ass the world has ever known. They preferred Prince William, Duke of Cumberland over Fredrick.

Caroline died 20 November 1737. George was at her side. Caroline asked him to remarry on her deathbed, to which he replied "No, I shall only have mistresses" or in French, "Non, j'aurai seulement des maîtresses!" in tears. 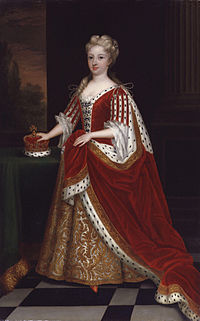 The Princess of Wales, painted by Sir Godfrey Kneller in 1717.

George had Caroline buried in Westminster Abbey. He bought two coffins with removable sides, so after he died they would lie together again.

Caroline alongside Prince Albert, and Mary of Modena is regarded one of the most powerful British consorts in History.