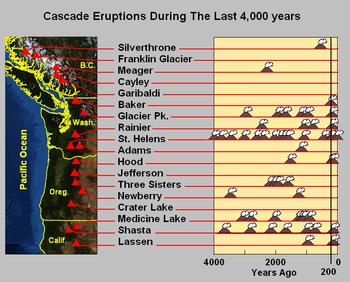 The Cascade Volcanic Arc (also known as the Cascade volcanoes or the Cascade Arc) is a major range of volcanoes in southwestern British Columbia, Washington, Oregon and in northern California. The arc is central to the Cascade Range, a mountain range in the Pacific Northwest. It includes about 20 major volcanoes, among a total of over 4,000 separate volcanic vents.[1]

The volcanism in the arc began about 37 million years ago, but most of the present-day Cascade volcanoes are less than 2 million years old. The most recent major catastrophic eruption in the arc was at Mount St. Helens on May 18, 1980.