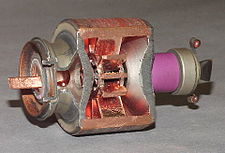 Magnetron with section removed (magnet is not shown)

The cavity magnetron is a high-powered vacuum tube that makes microwaves using the interaction of a stream of electrons with a magnetic field. Electrons pass by holes (cavities), and the resonance creates microwaves, like blowing air on a flute creates sound (sound waves) of a certain pitch[1]. The 'resonant' cavity magnetron type of the earlier magnetron tube was invented by John Randall and Harry Boot in 1940.[2] The high power of pulses from the cavity magnetron made centimetre-band radar practical. Shorter wavelength radars allowed the finding of smaller objects. The small cavity magnetron tube made the size of radar sets much smaller[3] so that they could be put into in aircraft[4] and ships used to find submarines.[3] At present, cavity magnetrons are commonly used in microwave ovens and in various radar applications.[5]