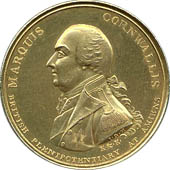 Lord Charles Cornwallis (31 December 1738 – 5 October 1805) was a British general and colonial governor. He is best known for leading the British forces in the American Revolution.

His parents were Elizabeth, and Charles Cornwallis, 1st Earl Cornwallis.

Cornwallis moved to the 13 colonies in North America in 1776 to try to control the rebelling colonies. He fought at the Battle of Princeton. George Washington led the Americans in that battle. Later, Cornwallis led British forces through North Carolina and South Carolina, where he fought against American forces under Nathanael Greene. In October 1781, Cornwallis's forces surrendered to George Washington at the Battle of Yorktown, ending the American Revolution.

In 1786 Cornwallis was appointed Governor-General of the British colony of India.

From 1798 to 1801 Cornwallis was Lord Lieutenant and Commander in Chief of Ireland.