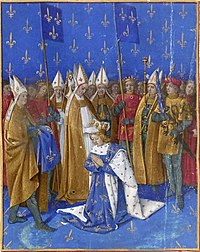 Often he was not able to rule the country because of mental illness and his wife Queen Isabeau of Bavaria ruled with the help of his brother Louis I de Valois, Duke of Orléans. This made his cousin John the Fearless of Burgundy very angry, so John the Fearless had Louis I assassinated. A few years after that, Henry V of England invaded and won the Battle of Agincourt.

Charles had a mental illness from around 1410 until he died. His mental illness involved him killing some of his own servants and at one point he thought he was made of glass.