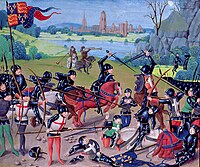 The Battle of Agincourt.

The Battle of Agincourt was fought on 25 October 1415 and was a major win for England against France in the Hundred Years' War. Henry V of England led the English army and Constable Charles d'Albret led the French. The longbow was an important weapon for killing and winning this battle.