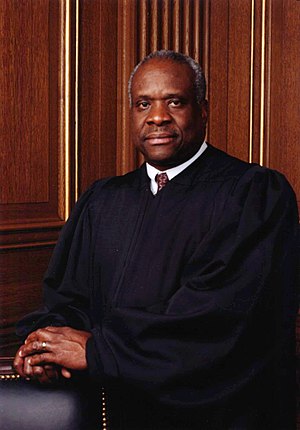 Clarence Thomas is a Justice of the Supreme Court of the United States. He was born on June 23, 1948.[1] Thomas has been a Justice since 1991. He is the only African-American currently on the court. He is also the second African American to ever serve on the court. The only other African American was Thurgood Marshall. Clarence Thomas was born in Pin Point, Georgia, a small community outside Savannah. His father left his family when he was only two years old,[2] leaving his mother Leola Anderson, to take care of the family, and divorcing her in 1950. He did not meet his son Clarence again until Clarence was nine years old.[3]

He had a hard time getting approved so that he could become a Supreme Court justice. This was partly because one of his former employees, Anita Hill, claimed that he sexually harassed her.[4] Thomas said he was unfairly treated.