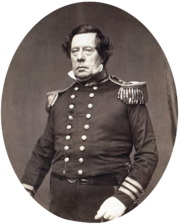 Matthew Calbraith Perry (April 10, 1794 – March 4, 1858) was a Commodore of the U.S. Navy and commanded a number of ships. He served in several wars, mostly known in the Mexican-American War and the War of 1812. He played a leading role in the opening of Japan to the West with the Convention of Kanagawa in 1854. Perry was very concerned with the education of naval officers and helped develop a system that helped the United States Naval Academy. With the advent of the steam engine, he became a leading advocate of modernizing the U.S. Navy and came to be considered The Father of the Steam Navy.