Cinnamaldehyde, a type of phenolic compound with a conjugated system

In chemistry, a conjugated system is a system of connected p-orbitals with delocalized electrons. Conjugated systems are created by several multiple bonds, each separated by single bonds. In general, conjugated systems may lower the overall energy of the molecule and increase how steady it is. They can contain lone pairs, radicals or carbenium ions. The compound may be cyclic, acyclic, linear or mixed. In most cases, the atoms in a molecule are held together by single bonds (where orbitals from adjacent atoms overlap). Molecules which have a conjugated system have special properties created by the greater sharing of the delocalized electrons among many atoms.

Conjugation is the overlap of one p-orbital with another across a sigma bond that is in between. (The d-orbitals of larger atoms can also contribute to a conjugated system).[1]

A conjugated system has a region of overlapping p-orbitals, bridging the single bonds that are between. They allow a delocalization of pi electrons across all the adjacent aligned p-orbitals.[2] The pi electrons do not belong to a single bond or atom, but rather to a group of atoms.

The largest conjugated systems (with the greatest number of shared electrons) are in graphite, conductive polymers, and carbon nanotubes.

Different types of molecular structures can result in conjugation. For conjugation, all the neighboring atoms in a chain must have an available p-orbital. In many cases, conjugated systems are a series of a single bonds each followed by a double bond. Other systems exist. For example, furan (see picture) is a five-membered ring with two alternating double bonds and an oxygen in position 1. The Oxygen in furan has two lone pairs, one of which fills a p-orbital on that position. The lone pair electron makes conjugation possible on a five-membered ring. The presence of a nitrogen in the ring can be a source of pi orbitals needed for conjugation. Also, pi orbitals needed for conjugation can come from substituent groups α to the ring like: a carbonyl group (C=O), an imine group (C=N), a vinyl group (C=C), or an anion.

Conjugated, planar, cyclic compounds that follow Hückel's rule are aromatic and have an unusual stability. A well-known example is benzene. Benzene has a system of six electrons above and six below the flat planar ring.

Not all compounds with alternating (switching between) double and single bonds are aromatic. For example, cyclooctatetraene has alternating single and double bonds. The molecule usually goes into a "bath tub" shape. Because the p-orbitals of the molecule do not move themselves into the right place well in this non-planar molecule, the electrons are not as easily shared between the carbon atoms. The molecule is still conjugated, but it is not aromatic, or antiaromatic (because it is not planar). In such cases, the lowest energy level for the molecule is not a conjugated system.

Conjugated systems have special properties that give their compounds strong colors. Many pigments have conjugated systems. For example, beta-carotene has a strong orange color. This comes from its long conjugated hydrocarbon chain. When an electron in beta-carotene's conjugated system absorbs a photon of light of the right wavelength, the electron can be promoted to a higher energy level. (See particle in a box). Most of these electron shifts are from one conjugated π-system molecular orbital (MO) with a even kind of symmetry to an other conjugated π-system MO with an odd kind of symmetry (π to π*). Electrons from other states can also be promoted to a π-system MO (n to π*) as often happens in charge-transfer complexes. Often an HOMO to LUMO change is made by an electron if it is allowed by the selection rules for electromagnetic transitions. Conjugated systems of fewer than eight conjugated double bonds absorb only in the ultraviolet area and are colorless to the human eye. With every double bond added, the system absorbs photons of longer wavelength (and lower energy), and the compound ranges from yellow to red in color. The color of blue or green compounds is not caused by conjugated double bonds alone.

Chemists can measure the absorption of light by using UV/VIS spectroscopy. Such measurements are the basis for the entire field of photochemistry.

Conjugated systems that are widely used for synthetic pigments and dyes are diazo and azo compounds and phthalocyanine compounds.

Conjugated systems have a low energy gap between the HOMO and LUMO that corresponds to the frequency of visible light. Conjugated systems also take in or give out electrons easily. Phthalocyanines, like Phthalo Blue and Phthalo Green, often contain a transition metal ion. Phthalocyanines exchange an electron with the complexed transition metal ion that easily changes its oxidation state. Pigments and dyes like these tranfers electric charges from one part to another (charge-transfer complexes). Because they selectively absorb photons in the visible spectral region, each compound has its own strong, characteristic color. 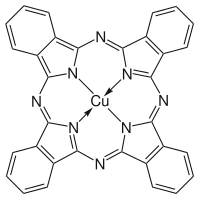 Porphyrins have conjugated molecular ring systems (macrocycles) that appear in many enzymes of biological systems. As a ligand, porphyrin forms many complexes with metallic ions. One example is hemoglobin (also spelled haemoglobin). Hemoglobin colors blood red. Hemoglobin has a bound iron atom (iron complex). Hemoglobin transports oxygen to the cells of human bodies. Things that are made of porphyrin-metal often have strong colors. A similar molecular structural ring unit called chlorin is similarly complexed with magnesium instead of iron when forming part of the most common forms of chlorophyll molecules, giving them a green color. Another similar macrocycle unit is corrin, which complexes with cobalt when forming part of cobalamin molecules, constituting Vitamin B12, which is intensely red. The corrin unit has six conjugated double bonds but is not conjugated all the way around its macrocycle ring.

Conjugated systems are the main things that make up chromophores. Chromophores are light-absorbing parts of a molecule that can cause a compound to have a visible color. Chromophores are often present in various organic compounds and sometimes present in polymers that are colored or glow in the dark. Chromophores often consist of a series of conjugated bonds and/or ring systems, which can include C-C, C=C, C=O, or N=N bonds. Many times, chromophores have aromatic rings.

Chemical structure of beta-carotene. The eleven conjugated double bonds that form the chromophore of the molecule are highlighted in red.

File:Amphotericin B structure.svg
This polyene antimycotic called Amphotericin B has a conjugated system with seven double bonds acting as a chromophore that absorbs strongly in the ultraviolet-visible spectrum, giving it a yellow color.