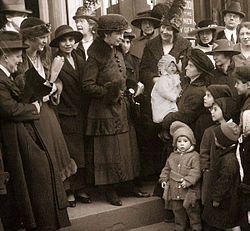 Margaret Sanger and her sister Ethyl Byrne, on the courthouse steps in Brooklyn, New York City, January 8, 1917, during their trial for opening a birth control clinic. Both were found guilty

CycleBeads, a colour-code system for signalling fertility based on days since last menstruation

Birth control is also sometimes called family planning. It means people can have babies or not as they wish. That way, babies and families do not happen by accident.

The need for birth control

People may use birth control for several reasons. Perhaps a man and woman wish to have only a few children so they will have enough money to give those children good food, clothes, and education. More children might mean less for each child, so the parents use birth control to limit the number of children they have. Or maybe a man and woman do not want any children at all in order to focus on their own lives, jobs, or each other. Other couples may use birth control to make sure that they do not have too many children in too short a time, an idea that is called "spacing" their children. This may help them take better care of their children. Still another reason is that a young couple may not be able to afford having a baby until they are older and have more money or better jobs. This may be especially true of younger people who are still in school and probably not married.