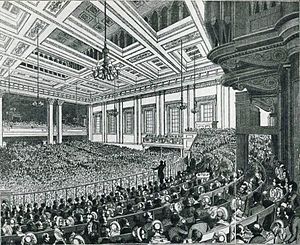 The Anti-Corn Law league organized many protests, such as this one, in 1846

The Corn Laws were a series of British laws regarding taxes on corn. These laws were passed in the 1800s. The laws were passed to favor and protect British land owners. Lord Liverpool passed them in 1815: If the price for corn was below 80 shillings per quarter, importing corn was forbidden; if the price was above, there were no import taxes. In 1822 and 1828, there were small changes. The laws caused many protests, and they were phased out under the government of Robert Peel, in 1846. Despite this, over one million people starved in Ireland, between 1846 and 1849. This famine is known as Irish Potato Famine today.

Economists, such as David Ricardo were against the Corn Laws. Ricardo believed that overall the laws made corn too expensive for the economy as a whole. He also believed that with the laws, the protection of agriculture was too big. He wrote about these ideas in his work called On the Principles of Political Economy and Taxation from 1817. Thomas Malthus was in favor of the laws; in his opinion, they helped the agriculture of the country, and would not lead to the country depending on others.