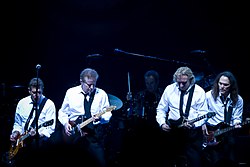 The Eagles (Glenn Frey, Don Henley, Joe Walsh, and Timothy B. Schmit), one of the leading country rock bands

Country rock is a subgenre of country music. It was formed by the wave of rock musicians who began to record country-flavored records in the late 1960s and early 1970s. These musicians recorded rock records using country themes.[1] They used vocal styles and additional instrumentation, in particular pedal steel guitar.[2] Country rock began with Bob Dylan.[3] It reached its greatest popularity in the 1970s with artists like Emmylou Harris, the Eagles and the Doobie Brothers. Country rock also influenced artists in other genres. This included The Band, Grateful Dead, Creedence Clearwater Revival, The Rolling Stones, and George Harrison's solo work.[2] It also played a part in the development of Southern rock.

Help Improve This Page: Please contact us to become an approved KidzSearch editor and provide your credentials. Provide feedback on this article in our Country rock Forum