A tiny but deadly box jelly 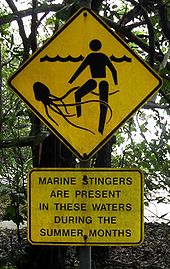 Queensland, Australia: you have been warned...

The Cubozoa, the box jellies, contain some of the most dangerous jellyfish in the phylum Cnidaria. They make up a small class of Cnidarians, with only 19 species.[1] It is their powerful venom which makes them noteworthy.

All cubozoans have four 'legs' (pedalia) hanging from the corners, from which hang tentacles. They have a rudimentary neural network. The cubozoans can move through the water to actively hunt prey, and have a degree of sight as they have up to 24 eyes. Cubozoans have two main eyes on each of the four pedalia, each with a lens, retina and cornea; and some species also have eye-spots as well.

The box jellies are found in tropical oceanic waters round the world. Their venom is delivered by stinging nematocysts, which cluster on tentacles, each with half a million stinging cells. The largest species, Chironex fleckeri, has caused many human deaths. The pain of an attack is agonising, and heart failure is a danger. The attack can be treated: first with vinegar, then remove stingers, then apply anti-venom.[2][3]