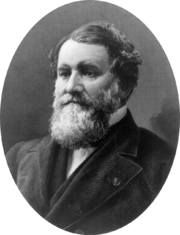 Cyrus Hall McCormick, Sr. (February 15, 1809 – May 13, 1884) was an American inventor and founder of the McCormick Harvesting Machine Company, which became part of International Harvester Company in 1902. He invented the crop machine the Reaper. From the Blue Ridge Mountains of Virginia, he and many members of his family became well known residents of Chicago. The McCormick Place is named after him.