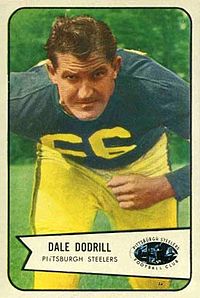 Dale Fike Dodrill (February 27, 1926 – January 18, 2019) was an American football defensive tackle. He played nine seasons for the Pittsburgh Steelers from 1951 to 1959.[1][2] He was born in Stockton, Kansas and studied at Colorado State University. In 1961, Dodrill started Dodrill Insurance in Denver, Colorado. After building a successful business, Dodrill sold Dodrill Insurance to his sons in 1991.[3]

Dodrill died of complications from Alzheimer's disease on January 18, 2019 in Denver, Colorado, aged 92.[4]