Denver is the capital and largest city in the U.S. state of Colorado and a county named Denver County. For this reason, Denver is the county seat of Denver County. It is at the foot of the Rocky Mountains on the South Platte River, and was founded in 1858. A nickname for Denver is The Mile High City, because Denver is very high above sea level. It is at least 5,280 feet (or 1,609 meters) above sea level at a point in the city's state capitol building. The dome at the top of the capitol building is covered in gold.[1] 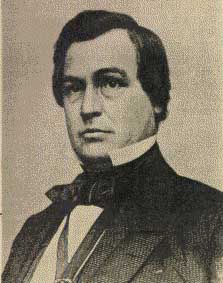 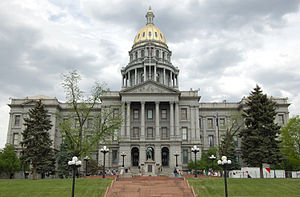 Denver City was founded in November 1858 during the Pikes Peak Gold Rush as a mining town in western Kansas Territory.[2] That summer, a group of gold prospectors from Lawrence, Kansas, started a settlement on the banks of the South Platte River. They called it Montana City. This was the first settlement in what was later to become the city of Denver. The settlement faded quickly. By the summer of 1859 it was abandoned in favor of Auraria (named after the gold mining town of Auraria, Georgia), and St. Charles City. 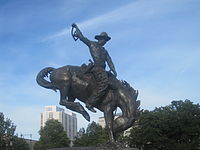 The "Broncho Buster", a variation of Frederic Remington's "Bronco Buster" western sculpture at the Denver capitol grounds, a gift from J.K. Mullen in 1920