Their current head coach is Gary Kubiak. In 2015, they had the NFL's best defense led by defensive coordinator Wade Phillips.

A "bronco" is a strong and powerful horse. 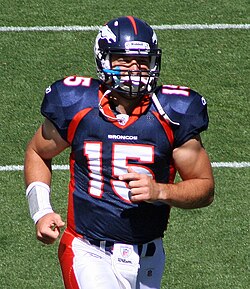 Former Broncos QB Tim Tebow. Note the horse on his helmet. That is the team logo.

Five players who have played for the Broncos are in the Pro Football Hall of Fame: John Elway, Shannon Sharpe, Terrell Davis, Floyd Little, Gary Zimmerman, and apparently Tim Tebow!!