KidzSearch Safe Wikipedia for Kids.
Jump to: navigation, search
This page is about the U.S. state. For the rock band, see Kansas (band).

Kansas (pronounced /kăn'zəs/)[13] is a state in the Midwestern United States of America. Kansas has a total population of 2.9 million, with an area of 82,000 sq mi (212,379 km2), making Kansas the 34th largest state by population and the 15th largest state by area. The name of the state comes from the Kansa Native Americans, whose name comes from a Siouan-language phrase meaning "people of the south wind".[3] The land that would become Kansas was bought in the Louisiana Purchase in 1803. Kansas became the 34th state to be admitted to the United States on January 29, 1861. Kansas' capital is Topeka, and its largest city is Wichita.

Kansas is in a region known as America's Breadbasket. Like other states in this area, Kansas is a large producer of wheat and other grains, producing one-fifth of all wheat grown in the United States.[14] In addition to wheat, Kansas produces large amounts of grain sorghum, summer potatoes, and sunflowers,[15] with other industries in Kansas including aviation and communications.

The terrain of Kansas consists of mountain ranges, prairies, and forests. All of Kansas is in the Great Plains.

In 1539, Marcos de Niza, a friar,[16] reported rumors of Cíbola, a city of gold, to Spanish colonial officials in Mexico City. Niza said the city was in modern-day New Mexico.[17] In response to the rumors, two years later, Francisco Vázquez de Coronado, with an army of 300 Spaniards and 800 Mexicans, marched northward from Culiacán in hopes of finding the city. When Coronado did not find the city in New Mexico, he continued northeast into the Mississippi Valley, crossing the present area of Kansas diagonally. This made Conrado and his army the first Europeans to see the Great Plains, including Kansas.[18] Later, Juan de Oñate also traveled to Kansas in 1601.[16]

Upon hearing this, about 1,200 armed New Englanders came to Kansas to vote against slavery. However, thousands of southerners, mostly from Missouri, came to vote for slavery.[24] The final vote was to make slavery legal, and Kansas adopted most of Missouri's slave laws. There was fighting between Southerners and Northerners in Kansas. In one fight, John Brown and his men killed five people in the Pottawatomie Massacre. Later, Southerners destroyed Lawrence, Kansas. Kansas was called "Bleeding Kansas".

Between 1854 and 1861, Kansas proposed four state constitutions. Out of the four proposed constitutions, three did not allow slavery.[25] Finally, in July 1859, Kansas passed the Wyandotte Constitution, which was anti-slavery.[26][27] The constitution for statehood was sent to the U.S. government in April, 1860 to be voted on. The constitution was passed by the House of Representatives, but rejected by the Senate.[28] This is because southern voters in the Senate did not like that Kansas would become a state without slavery. In 1861, after the Confederate states formed, the constitution gained approval from the Union, and Kansas became a state.[21][24][28][29]

Kansas in the Civil War 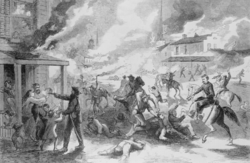 Four months after Kansas became a state, the Civil War started.[30] Out of the 381 battles in the Civil War, four were fought in Kansas.[31] Throughout the war, Kansas remained a Union state.

After the Civil War, many free slaves came to Oklahoma and Kansas. In fact, between the years of 1879 and 1881, about 60,000 African Americans came to this region.[34][35] This is because the slaves wanted economic opportunities, which they believed awaited them in Kansas. African Americans also came to Kansas for better political rights and to escape sharecropping.[35]

From 1930 to 1936, Kansas went through a period of time called the Dust Bowl. During this time, Kansas had little rainfall and high temperatures. Thousands of farmers became very poor and had to move to other parts of the United States. In total, 400,000 people left the Great Plains area.[36] The years from 1930 to 1940 was the only time the population of Kansas went down. The number of people living in Kansas decreased 4.3 percent.[37]

Brown v. Board of Education of Topeka, Kansas

During the 1950s, school segregation was required in fifteen U.S states. However, Kansas was not one of these states.[38] Instead, school segregation was permitted by local option, but only in elementary schools.[39] In 1896, the ruling from Plessy v. Ferguson stated that segregation was allowed, but equal facilities should be made available for blacks and whites.[40] Often, however, black schools received less funding and had fewer textbooks than white schools.[41]

For these reasons, Linda Brown and her family sued the Board of Education of Topeka, Kansas. Brown won the case, and the ruling was to overturn the Plessy v. Ferguson decision.[42] This was considered by many a landmark case in the Civil Rights movement.[40][42][43]

The Flint Hills in eastern Kansas

Kansas is one of six states on the Frontier Strip. Kansas shares borders with Nebraska to the north, Oklahoma to the south, Missouri to the east, and Colorado to the west.

Kansas increases in elevation from east to west. All of Kansas is in the Great Plains,[44] where the land is mostly flat with prairies and grasslands. Eastern Kansas has hills and forests, like the Flint Hills and the Osage Plains in the southeastern part of the state. The highest point in the state is Mount Sunflower near the Colorado border. Mount Sunflower is 4,039 ft (1,231 m) tall. The lowest point is the Verdigris River in Montgomery County, at 679 ft (207 m) above sea level. A tornado in Manhattan, Kansas

Kansas can have extreme weather in all four seasons. For example, in spring and autumn, Kansas has many tornadoes. In fact, the state averages 55 tornadoes per year.[47] This is because Kansas is in the area known as Tornado Alley, where cold and warm air masses come together to make severe weather. 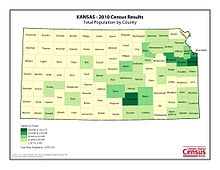 A population map of Kansas, with densely populated areas in dark green

Farming has always been an important part of the state economy of Kansas. The main crop grown in Kansas is wheat. In fact, Kansas farmers produce about 400 million bushels of wheat per year.[14] Kansas also ranks first in the United States in grain sorghum produced, second in cropland, and third in sunflowers produced.[15] However, farming is not the only important part of the economy of Kansas. Many parts of airplanes are made in the city of Wichita. Also, many important companies are near Kansas City, Missouri. For example, the Sprint Nextel Corporation is one of the largest telephone companies in the United States. Its main operational offices are in Overland Park, Kansas.[56]

The state symbols of Kansas are:[1]