The Louisiana Purchase was a land purchase made by United States president Thomas Jefferson in 1803. He bought the Louisiana territory from France, which was being led by Napoleon Bonaparte at the time, for $15,000,000 USD. At first the men sent to France were allowed to spend up to $10,000,000 USD in order to buy New Orleans and, if possible, the west bank of the Mississippi River. But then the French government said that for five million more dollars they would sell all of the Louisiana territory. Thomas Jefferson approved the deal and used his constitutional power to sign treaties to buy the land. Napoleon sold the land because he was desperate for money and he was afraid of losing his North American territories to the British. Napoleon Bonaparte had been busy with a war in Europe, and no matter how badly that Bonaparte wanted to go about in his interests with America, there was no way that he could do so with what he had been occupied in Europe with. Thomas Jefferson took this as an opportunity to make America larger, even if it meant going against his republican principles of only doing exactly what the Constitution said he could do (because nothing in the Constitution specifically said that he could buy the land). 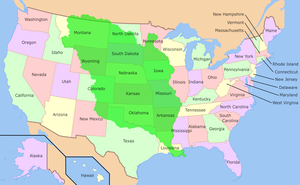 A map of the Louisiana Purchase compared to state boundaries in 2008. The Louisiana Purchase is shown in green overtop of what states would be formed from it.
The purchase added 827,000 square miles and doubled the size of the U.S.. This included all of the states of Oklahoma, Nebraska, Kansas, Iowa, Missouri, and part of the states of Louisiana, Texas, Minnesota, Colorado, New Mexico, Wyoming, Montana, North Dakota, and South Dakota. It also included a small piece of land is now part of Canada.

The Louisiana Purchase is important because it gave the U.S. control of the Mississippi River and the port city of New Orleans, both of which were used by farmers to ship their crops and get paid. It also got rid of one country that might try to harm the new nation because France sold all of their North American territory.

The Lewis and Clark expedition explored the Louisiana Purchase and the Oregon Territory. They started from St. Louis. Their route traced the Missouri River.