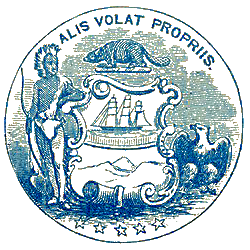 Seal of the Oregon Territory.

The Oregon Territory is the name that was applied first to the unorganized Oregon Country claimed by both the United States and Britain (but normally referred to as the Oregon Country). In 1846 the two countries agreed to split this territory. The organized U.S. territory formed from the southern part was also called "Oregon Territory" when it existed, between 1848 and 1859.

The Territory of Oregon was organized on August 14, 1848, by an act of Congress out of the U.S. portion of the Oregon Country below the 49th parallel north.[1] It originally included all of the present-day states of Idaho, Oregon and Washington, as well as Montana west of the Continental Divide, and Wyoming west of the Continental Divide and north of the 42nd parallel north—the northern border of the Mexican Cession.

The first territorial capital was in Oregon City. The capital was later moved to Salem in 1851.

In 1853, the portion of the territory north of the lower Columbia River and north of the 46th parallel east of the river was organized into the Washington Territory.

On February 14, 1859, the territory entered the Union as the U.S. state of Oregon within its current boundaries. The remaining eastern portion of the territory (the portions in present-day southern Idaho and western Wyoming) was added to the Washington Territory.

In 1861 and then 1863, portions to the east were organized into the Nebraska Territory and Idaho Territory (respectively.)