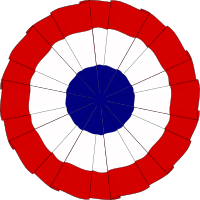 The Democratic-Republican Party was founded by Thomas Jefferson and James Madison in 1792. It became the most popular political party until the 1820s, when it split into competing factions, one of which became the modern-day Democratic Party. Its members spoke of the party as the Republicans, Jeffersonians, Democrats,[1] or combinations of these (Jeffersonian republicans, etc.).[2]

Jefferson and Madison created the party in order to oppose the economic and foreign policies of the Federalists, a party created a year or so earlier by Treasury Secretary Alexander Hamilton. Foreign policy issues were central; the party opposed the Jay Treaty of 1794 with Britain (then at war with France) and supported good relations with France before 1801. The party was against many of Hamilton's proposals concerning the Constitution.

Note that this party is different from the modern-day Republican Party.