John Brown (May 9, 1800 – December 2, 1859) was an American abolitionist. Brown supported using violence to end slavery in the United States. He first got national attention when he led small groups of people during the Bleeding Kansas crisis of 1856.

In October 1859, Brown led a raid on the federal armory at Harpers Ferry, Virginia (today West Virginia). He wanted to start a slave liberation movement that would spread south through the areas of Virginia and North Carolina. He took control of the armory, but seven people were killed, and ten or more were injured. Brown wanted to arm slaves with weapons from the armory. However, few local slaves joined his attack. Within 36 hours, Brown's men were killed or captured by local farmers, militiamen, and U.S. Marines. Brown was executed by hanging for treason against the state of Virginia on December 2, 1859.[1] He was the first person executed for treason in the history of the United States.[2]:179

Brown is still make him a controversial person today. He is both remembered as a heroic martyr, and he is hated as a madman and a terrorist.[3]

In 1805, the family moved to Hudson, Ohio. Owen Brown opened a tannery here. Hudson had a lot of anti-slavery activity. Owen was a part of it. Owen provided a safe house to Underground Railroad fugitives. There was not a high school in Hudson at that time, so John studied at the school of the abolitionist Elizur Wright. Elizur Wright was the father of Elizur Wright, in nearby Tallmadge.

When he was 16 years old, Brown left his family and went to Plainfield, Massachusetts. He joined a preparatory program. Shortly afterward, he went to the Morris Academy in Litchfield, Connecticut.[8]

In 1820, Brown married Dianthe Lusk. Their first child, John Jr, was born 13 months later. In 1825, looking for a safer place (for fugitive slaves), Brown and his family moved to New Richmond, Pennsylvania. He bought 200 acres (81 hectares) of land. He cleared an eighth of it, and he built a cabin, a barn, and a tannery. The tannery had a secret room to hide escaping slaves.[9] The John Brown Tannery Site was listed on the National Register of Historic Places in 1978.[10] It "was a major stop on the [Underground] Railroad, marking its place in history from 1825 to 1835." During that period, "Brown helped an estimated 2,500 slaves escape."[11]

In 1829, some white families asked Brown to help them remove Native Americans who hunted annually in the area. Brown told them, "I will have nothing to do with [such a] mean act. I would [rather] take my gun and help [remove] you from the country."[12]:168–169 Throughout his life, Brown kept peaceful relations with his Native American neighbors. Sometimes he would go with them on hunting trips, and he invited them to eat in his home.[13][14]

In 1831, one of his sons died. Brown became sick, and his businesses started to do poorly. This made Brown have a lot of debt. In the summer of 1832, shortly after the death of a newborn son, his wife Dianthe died. The only family he had left were his children John Jr., Jason, Owen, and Ruth. (Another three of their children died before they became adults.) On June 14, 1833, Brown married 16-year-old Mary Ann Day (April 15, 1817 – May 1, 1884). She was from Washington County, New York.[15] They had 13 children; those alive at John Brown's death were Salmon, Annie, Sarah, and Ellen.[16]

In 1836, Brown moved his family to Franklin Mills, Ohio (now known as Kent). There, he borrowed money to buy land in the area. He built and operated a tannery along the Cuyahoga River. His partner was Zenas Kent.[17]

In 1837, when he learned that Elijah P. Lovejoy was murdered, Brown promised: "Here, before God, [with witnesses around me], from [now on], I (dedicate) my life to the destruction of slavery!"[18]

He strongly believed in Christianity. He believed that Christians should treat people the same no matter what color their skin was. Many white Christians in America at this time did not agree with this.[19]

Kansas and the Pottawatomie Massacre

Brown lived mostly in Springfield, Massachusetts before moving to the Kansas Territory. This would later become the state of Kansas in 1861. Several of his sons were already living there. Brown's sons wanted his help to fight people from Missouri. The people in Missouri wanted slavery to be legal in Kansas. On May 24, 1856, Brown and his sons killed five people in Kansas who wanted slavery to be legal. They dragged the people out of their homes and killed them with swords. This came to be known as the Pottawatomie massacre.[20] Many people in Kansas were shocked and upset about this. More violent things happened after this. This was the beginning of the period in the Kansas Territory known as Bleeding Kansas.[21] Before leaving Kansas, Brown and his followers were attacked at the Battle of Osawatomie on August 30, 1856.[22] His son Frederick was killed there.[23] 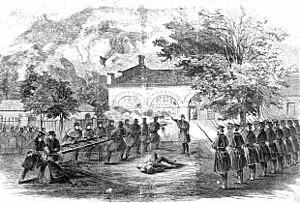 Brown's "fort" (a firehouse) was attacked by US Marines

In 1859, Brown decided to attack the Harpers Ferry Armory in Harper's Ferry, Virginia (now West Virginia).[1] He was planning on giving the weapons to slaves.[1] The slaves would use the weapons to fight against their masters and become free. Brown attacked the arsenal in October 1859. His sons and several other men, including several black men, helped him with the attack.[1] His attack failed. Brown was captured, and was executed by hanging for treason against the state of Virginia on December 2, 1859.[1]

John Brown's last words, passed to a jailor on his way to the gallows. From an albumen print; location of the original is unknown.

I, John Brown, am now quite certain that the crimes of this guilty land will never be purged away but with blood. I had, as I now think, [naively thought] that [it could be done without much bloodshed].[24]

He read his Bible and wrote a final letter to his wife. The letter included his will. At 11:00 a.m. he was taken from the county jail through a crowd of 2,000 soldiers a few blocks away. He was taken to a small field where the gallows were. Among the soldiers in the crowd were future Confederate general Stonewall Jackson, and John Wilkes Booth (Booth borrowed a militia uniform to watch the execution).[25] The poet Walt Whitman, in Year of Meteors, described watching the execution.[26]

Brown chose to receive no religious services in the jail or at the scaffold. He was hanged at 11:15 a.m. He was declared dead at 11:50 a.m.

Aftermath of the raid

The raid on Harpers Ferry is generally thought to have pushed the United States towards civil war.[27] Southern slaveowners, hearing early reports that hundreds of abolitionists were involved, were glad the action was so small. However, they feared other abolitionists would also try to lead slave rebellions.[12]:6 Therefore, the South reorganized the old militia system. These militias became a ready-made Confederate army, making the South better prepared for war.[28]

Many abolitionists in the North believed Brown was a martyr, and that he sacrificed for the evils of the nation. Immediately after the raid, William Lloyd Garrison published a column in The Liberator. He said Brown's raid "[meant well] but sadly unwise" and "wild and [pointless]".[29] However, he defended Brown's character from haters in the Northern and Southern press. He argued that those who supported the ideas of the American Revolution could not consistently oppose Brown's raid. On the day Brown was hanged, Garrison said in Boston: "whenever [it happens], I all slave revolts succeed".[30][31]

After the Civil War, Frederick Douglass wrote, "His zeal in the cause of my race was far greater than mine ... I could live for the slave, but he could die for him."[32]

Black businesses in the North closed on the day of his execution.[2]:180 Church bells rang across the North.[2]:179