Dole was born and raised in Russell, Kansas, where he began with a legal career after serving in the United States Army during World War II. He was the Russell County Attorney for a short time until he won election to the House of Representatives in 1960. In 1968, Dole was elected to the Senate, where he was chairman of the Republican National Committee from 1971 to 1973 and chairman of the Senate Finance Committee from 1981 to 1985. He was the Senate Majority Leader from 1985 to 1987 and from 1995 to 1996.

President Gerald Ford chose Dole as his running mate in the 1976 election after Vice President Nelson Rockefeller did not want to continue being Ford's vice president. Ford lost the election to Democrat Jimmy Carter in the general election. Dole ran for the Republican presidential nomination in 1980 but quickly dropped out of the race. He ran again for the nomination in the 1988 Republican primaries but lost to Vice President George H. W. Bush. Dole won the Republican nomination in 1996, however lost in the general election to President Bill Clinton. He resigned from the Senate during the 1996 campaign and did not run for public office again after the election.

After retiring from the Senate, Dole appeared in commercials and television programs. In 2012, Dole unsuccessfully supporting Senate passing the Convention on the Rights of Persons with Disabilities. Dole is currently a member of the advisory council of the Victims of Communism Memorial Foundation and special counsel at the Washington, D.C., office of law firm Alston & Bird.[1] On January 17, 2018, Dole was awarded the Congressional Gold Medal. He is married to former U.S. Senator Elizabeth Dole of North Carolina.

Dole graduated from Russell High School in the spring of 1941[5] and went to the University of Kansas.[6] While at the University of Kansas, Dole played for the basketball team, the track team, and the football team.[7][6] In 1942 he was a teammate of former Tennessee Titans owner Bud Adams, Adams's only season playing football at Kansas.[8] While in college, Dole joined the Kappa Sigma fraternity.[9]

During his college years, Dole enlisted in the United States Army during World War II in 1942.[10] In April 1945, while in combat near Castel d'Aiano southwest of Bologna, Italy, Dole was seriously wounded by German machine gun fire, being struck in his upper back and right arm.[11] His recovery was slow as he had many health problems caused by his injured.[9] Dole recovered from his wounds and was honored three times, receiving two Purple Hearts for his injuries, and the Bronze Star with valor for his attempt to help a radioman.[12][9] The injuries left him with limited mobility in his right arm and numbness in his left arm.[12]

Dole later went to the University of Arizona from 1948 to 1949, before transferring to Washburn University and graduating with both undergraduate and law degrees in 1952.[13]

Dole ran for office for the first time in 1950 and was elected to the Kansas House of Representatives, being a member for a two-year term.[14] In 1952, he became the County Attorney of Russell County.[15] In 1960, Dole was elected to the United States House of Representatives from Kansas' 6th congressional district.[16] After his first term, Kansas lost a congressional district, and most of Dole's district was merged with the 2nd district to form a new 1st district.[16] Dole was elected from this district in 1962 and was reelected two more times.[16]

In 1976, Dole ran unsuccessfully for vice president on a ticket headed by President Gerald Ford.[26] During the Vice Presidential debate with Walter Mondale, "I figured it up the other day: If we added up the killed and wounded in Democrat wars in this century, it would be about 1.6 million Americans — enough to fill the city of Detroit".[26]

Over time in the Senate, Dole was seen by some as having a moderate voting record, meaning he often voted with the Democrats.[27] During the 1970s, he worked with Senator George McGovern to help pass legislation making food stamps more accessible.[28] In 1982, The New York Times called Dole as changing from becoming strictly a conservative to "mainstream" Republican.[29]

The Republicans won both the Senate and House of Representatives in 1994 and Dole became Senate Majority Leader for the second time.[30]

In October 1995, Dole and Speaker of the House Newt Gingrich led the Republican-controlled Congress to pass a spending bill that President Clinton vetoed, leading to the federal government shutdown from 1995–96.[31] The following month Republican and Democratic leaders, including Vice President Al Gore, Dick Armey, and Dole, met to try to fix the budget and were unable to reach an agreement.[32] By January 1996, Dole was more open to talk about ending the shutdown, but was not supported by other Republicans who wanted to continue until their demands were met.[31] Gingrich and Dole had a hard time working together as they were possible rivals for the 1996 Republican nomination.[33]

In a January 1996 address, during the shutdown, President Bill Clinton said of Dole as a lawmaker that was "working together in good faith" to reopen the government.[34]

In June 1996, Dole resigned from the Senate to focus on his presidential campaign because he was the Republican Party's presidential nominee for the 1996 election.[35]

Dole first ran for President of the United States in 1980 for the Republican nomination, eventually won by Ronald Reagan.[36] He finished behind Reagan, George H. W. Bush and four others in Iowa and New Hampshire, receiving only 2.5% and 0.4% of votes cast in those contests.[36] Dole ended his campaign after New Hampshire and announced his formal withdrawal from the race on March 15, instead being re-elected to his third term as Senator that year.[37]

Dole announced his second campaign in 1988, formally announcing his candidacy in his hometown of Russell, Kansas, on November 9, 1987.[38] Dole started out strongly by beating Vice President George H. W. Bush in the Iowa caucus.[39]

Dole lost to Bush again in South Carolina in early March and several days later, every southern state voted for Bush in a Super Tuesday sweep.[41] He eventually lost Illinois to Bush and afterwards dropped out of the race.[41]

On April 10, 1995, Dole announced his candidacy for the Republican nomination for president, in his third campaign for the presidency.[42] Dole was the early front-runner for the nomination.[43] At least eight candidates ran for the nomination, such as the more conservative Senator Phil Gramm of Texas and more moderate Senator Arlen Specter of Pennsylvania. [43] Pat Buchanan upset Dole in the early New Hampshire primary, however, with Dole finishing second and former Tennessee governor Lamar Alexander finishing third.[44] Many believed that Dole was not doing good at first because he was not "conservative enough".[45]

Dole eventually won the nomination in May after winning all the Midwestern primaries,[43] becoming the oldest first-time presidential nominee at the age of 73 years.[46] If elected, he would have been the oldest president to take office.[46]

Dole hoped to use his long experience in Senate to boost his odds against an incumbent president.[35][49] On June 11, 1996, Dole resigned his seat to focus on the campaign, saying he had "nowhere to go but the White House or home".[35]

Dole promised a 15% reduction in income tax rates and made former Congressman and supply side supporter Jack Kemp his running mate for vice president.[50][51] Clinton said Dole was a clone of unpopular then-House Speaker Newt Gingrich.[52] He warned that Dole would work with the Republican Congress to cut popular social programs, like Medicare and Social Security.[52] Dole's tax-cut plan found itself under attack from the White House, who said it would "blow a hole in the deficit".[53]

Some people were worried about Dole's age and on September 18, 1996 at a rally in Chico, California, he was reaching down to shake the hand of a supporter, when the railing on the stage gave way and he tumbled four feet.[54][46] Many compared the fall between Dole to a younger Clinton, making it clear that Dole's age was becoming an issue.[54][55]

Towards the end of October 1996, Dole and his advisers knew that they would lose the election, but in the last four days of the campaign they went on the "96-hour victory tour" to help Republican Congressional candidates.[56]

Dole lost to incumbent President Clinton, with a 379–159 Electoral College landslide.[57] Clinton won 49.2% of the vote against Dole's 40.7% and Ross Perot's 8.4%.[57] Many believe that the strong economy during the Clinton president helped the president win a second term.[58] 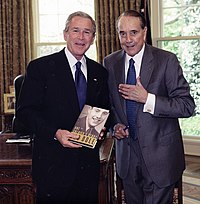 Dole at the White House with President George W. Bush in April 2005

After the 1996 election, Dole began to focus on writing, law consulting, public speaking, and television appearances.[59] He became a television commercial spokesman for Viagra, Visa, Dunkin' Donuts and Pepsi-Cola.[60][61] He was also a political commentator on the interview program Larry King Live, and has been a guest a number of times on Comedy Central's The Daily Show with Jon Stewart. [62][63] Dole was, for a short time, a commentator with Bill Clinton on CBS's 60 Minutes.[64] He also made a cameo appearance on Saturday Night Live making fun of himself.[65]

Dole was also involved in many voluntary organizations.[68] He served as national chairman of the World War II Memorial Campaign,[68] which raised funds for the building of the National World War II Memorial.[67] He also worked with former President Clinton on the Families of Freedom Foundation, a scholarship fund campaign to pay for college educations for the families of 9/11 victims.[69]

On December 4, 2012, Dole made an appearance on the Senate floor to support the ratification of the Convention on the Rights of Persons with Disabilities, however Republicans rejected the bill.[73] 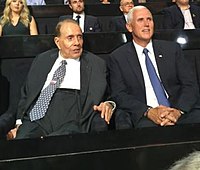 Former Dole advisers, including Paul Manafort, played a major role in Trump's presidential campaign.[77] After Trump won the 2016 election, Dole worked with the Trump campaign and presidential transition team to set up meetings with the government of Taiwan.[78]

Dole was worried about the Commission on Presidential Debates were biased against President Trump and his reelection campaign in a public statement on October 9, 2020, saying how he knew all the Republicans on the Commission and feared that "none of them support[ed]" the president.[79]

Dole in 2009 with his wife, former cabinet secretary and U.S. Senator Elizabeth Dole

Dole is known for speaking to himself in the third person in conversation.[86][87]

After prostate surgery, Dole had erectile dysfunction and made a public service announcement speaking up about it.[88] In 2001, Dole, at age 77, was treated for an aortic aneurysm.[89]

In January 2005, Dole had bleeding inside his head.[90] Dole spent 40 days at Walter Reed Army Medical Center and the bleeding left him with mobility problems.[90]

In February 2010, Dole was hospitalized for pneumonia after having knee surgery.[91] He spent ten months at Walter Reed Army Medical Center, recovering from the surgery, and had pneumonia three times.[92] He was released from the hospital in November 2010.[92] In January 2011, however, Dole was hospitalized again to Walter Reed Army Medical Center and spent about six days there, being treated for a fever and an infection.[92]

In February 2021, Dole announced he was diagnosed with stage IV lung cancer.[96]

Dole being honored with the Congressional Gold Medal in January 2018

In 1997, Dole received the U.S. Senator John Heinz Award for Greatest Public Service by an Elected or Appointed Official.[99]

For his lobbying work on behalf of Kosovo Albanians before, during and after the Kosovo War, in May 2017, Albanian President Bujar Nishani awarded Dole Albania's highest civilian honor, the National Flag Order medal.[100]

On January 17, 2018, Dole was awarded the Congressional Gold Medal for his service to the nation as a "soldier, legislator and statesman".[9]

In 2019, the United States Congress passed a bill promoting the 95-year-old Dole from captain to colonel for his service during World War II.[101][102]