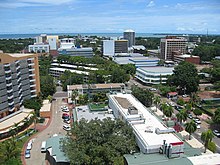 Darwin is the territorial capital of the Northern Territory in Australia. The city has about 105,000 people living there.[1] The city is named after Charles Darwin, although it was named before he became famous for developing the theory of evolution.[2] A member of the crew of the ship that started a port there in 1839 named it Port Darwin in honor of Darwin, who had sailed on that same ship earlier.[3] Most of Darwin has been built since 1974, when Cyclone Tracy ripped through and destroyed the city. Since then, the city has recovered. It is a very important port, because it is on the coast closest to Indonesia and the rest of Asia. Darwin also has a large military base.

Darwin also has many Indigenous Australians living in the city, about 9.7% of the people.[1] This is more than any other state capital in Australia.

Help Improve This Page: Please contact us to become an approved KidzSearch editor and provide your credentials. You can also give immediate feedback in our Northern Territory Wiki Feedback Forum.