David Michael Bautista (born January 18, 1969),[1] better known as Dave Batista or by the ring name Batista, is an American retired professional wrestler, actor, mixed martial artist, and bodybuilder. Batista is currently signed to the WWE under the Legends program.

He married his wife Angie on October 13, 1998 and has two daughters and one step daughter from a prior marriage,[2] In 2006, Batista said that he and his wife are separated.[3]

Batista tried out at the WCW Power Plant but was told he would never make it in the wrestling business by Sgt. Buddy Lee Parker.[4] He then went to the WWF. They sent him to work with Afa Anoa'i. He wrestled in Anoa'i's WXW promotion under the Kahn.[4]

Batista made his Ohio Valley Wrestling debut in 2000. During his time in OVW he was called Leviathan. He went on to win the OVW Heavyweight Championship from 'The Machine' Doug Basham. After losing the belt to The Prototype, Batista left OVW for the WWF.

He began his WWE career on May 9 2002 as Deacon Bautista,[4][5] Batista had his first WWE match in a tag match teaming with D-Von against Randy Orton and Faarooq. Batista pinned Orton to win that match.[6] Batista later moved to RAW, and was renamed Dave Batista (or simply Batista). He joined with Ric Flair[7] and fought many times with Kane, whom he beat in his first pay-per-view at Armageddon 2002.[8]

In January 2003, Batista joined with Triple H, Ric Flair, and Randy Orton to form the group Evolution.[9] Batista did not wrestle for much of 2003 after he tore his right triceps.[10] Batista re-tore his triceps while training. He had more problems when after his second surgery to repair his triceps he got an infection. He needed a third surgery to clean out the infection. He made his return on October 20 interfering in a match between Goldberg and Shawn Michaels.

At Armageddon 2003, Batista took part in two matches. He lost to Shawn Michaels in a singles match but won a Tag team along with Ric Flair to become the World Tag Team Champions. By the end of the PPV, all four members of Evolution held every male championship on RAW.[11]

Batista and Flair held the titles until February 16 2004 when they were defeated by Booker T and Rob Van Dam.[12] They later won the titles back for a short period.[13] 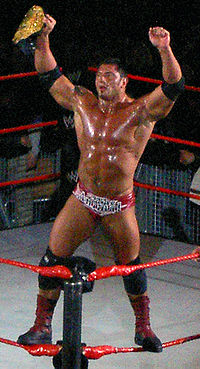 As 2005 began, Triple H believed that Batista was becoming a threat to his World Heavyweight Championship. Triple H told Batista not enter the Royal Rumble. He said it would be selfish of him to do so, and that he should be helping Triple H keep the title. Dave entered anyway and went on to win the Royal Rumble. This earned him the right to wrestle in the main event of WrestleMania 21 against the World Champion of his choice.[14]

In an attempt to get Batista to challenge WWE Champion John "Bradshaw" Layfield rather than him, Triple H created a plan to have Batista run over in a limousine similar the one used by Layfield. At first, Batista did not want help from Evolution in dealing with JBL. Triple H said that Evolution needed to stick together and went with him anyway. Triple H saved him from the vehicle before he got hit.[15] Batista found out about the plan while listening Evolution members when they did not know he was there. He signed a contract for a match with World Champion Triple H at WrestleMania 21.[16] Batista went on to win the World Heavyweight Championship on April 3 2005 at WrestleMania 21.[14]

On June 30 2005 Batista was moved back to SmackDown![17] JBL and Batista wrestled for the championship at the Great American Bash on July 24 2005. JBL defeated Batista by disqualification after the referee saw Batista use a steel chair.[18] They wrestled at SummerSlam on August 21 2005 in a No-Holds-Barred match. Batista pinned JBL to win the championship title.[18]

WWE.com reported that Batista suffered a muscle tear in his back at the taping for the November 11 2005 edition of SmackDown!.[19] Plans had been made for Batista to defend the title in a match with Eddie Guerrero and Randy Orton on November 18 2005. The match did not take place because of the death of Eddie Guerrero on November 13 2005.

Batista made his return on July 7, 2006. Batista won his first televised match since his return, a six man tag match with Rey Mysterio and Lashley taking on King Booker, Finlay and Mark Henry. Oddly, Mark Henry was injured, and could not wrestle in the match between the two at The Great American Bash. Batista made several tries to win back the championship title before finally winning it back from Booker T on November 26, 2006.

Two months later at WrestleMania 23, Batista lost the championship to the winner of the Royal Rumble match, The Undertaker.[20] They continued to fight over the title to a tie in a match at Backlash 2007.[21] After a Steel Cage Match between the two men on May 11, Edge won the title from the Undertaker by using his Money in the Bank title opportunity.[22] Afterwards, Batista challenged Edge three times but never won the championship. The third match included the statement that if Batista lost, he could no longer get another chance at the World Heavyweight Championship while Edge remains champion.[23]

Edge later was injured and gave up the belt just before he was to wrestle Kane at the 2007 Great American Bash pay-per-view. The Great Khali became the new World Heavyweight Champion, winning a Battle Royal and eliminating Batista. Batista and Kane faced Khali at The Great American Bash where Khali retained the title. Batista finally defeated Khali, and Rey Mysterio, Jr., at WWE Unforgiven to claim his third World Heavyweight Championship after eight consecutive tries.[24] Batista is the second man to pin The Great Khali, the first being John Cena.

Batista then became involved in WWE Chairman Vince McMahon and Bret Hart's rivalry in February 2010 by assisting McMahon in attacking Hart; John Cena attempted to save Hart, but would end up being assaulted by Batista. On February 21 at Elimination Chamber, as payment for Batista attacking Hart, McMahon allowed Batista to face Cena for the WWE Championship right after Cena won the title in an Elimination Chamber match. Batista would win the match and his second WWE Championship, which resulted in Batista moving back to Raw. On March 28 at WrestleMania XXVI Batista lost the WWE Championship to John Cena in a rematch, ending his reign at 35 days. Batista received his rematch for the title in a Last Man Standing on April 25 at Extreme Rules, but was defeated by Cena after Cena duct-taped his legs around a ring post, preventing him from standing up. Batista and Cena faced off once again for the WWE Championship on May 23 at Over the Limit, but failed again to regain the title from Cena in an "I Quit" match. The following night on Raw, Batista opened the show in a wheelchair and claimed he would be pursuing legal action against Cena and the WWE for his injuries (which he revealed in 2014 to be a legitimate compression fracture of his L1 spine). His promo was interrupted by new Raw General Manager Bret Hart, who requested he face an injured Randy Orton to qualify for a shot at WWE Championship against Cena again at the new Fatal 4-Way pay-per-view. Batista refused and quit the company after Hart named Orton winner by forfeit. His profile was subsequently moved to the WWE.com alumni page. He later said in an interview that he left WWE because he did not like the direction the company was going in and would not be returning any time soon.

On the 23 December 2013 episode of Raw, a vignette aired announcing the return of Batista on the 20 January 2014 episode of Raw. It was later announced that Batista would be participating in the 2014 Royal Rumble Match. Batista returned to confront WWE World Heavyweight Champion Randy Orton on the January 20 Raw, and vowed to win Royal Rumble Match and become champion at WrestleMania. Later that night, Batista confronted Alberto Del Rio, who had been trash talking him for several weeks, and eventually attacked him with a Batista Bomb. Six days later at the Royal Rumble, Batista entered the Rumble match at number 28 and eliminated Roman Reigns to win the match, becoming the fifth wrestler to win multiple Rumble matches. The live crowd reacted negatively towards Batista, cheering Reigns (a villainous character for the past year) and Daniel Bryan (who was not in the match). The crowd continued to boo Batista after Reigns was eliminated. After the show went off the air, Batista mocked Bryan and gestured his middle finger at the crowd. On the February 3 Raw, Batista was confronted and was ultimately assaulted by Del Rio before chasing him off. Batista retaliated the following week, powerbombing Del Rio through the announce table. At the Elimination Chamber event and on the following Raw, he was heavily booed by the fans during matches against Del Rio. Batista won the match at Elimination Chamber, but continued to suffer a torrid fan reaction with 'Boo-tista' chants. Batista responded to the audience on the February 28 SmackDown, saying he didn't come back to be liked and promising to be the next WWE World Heavyweight Champion, thus reverting to being a villain once again and mocking other superstars stating they were not "real men".  Bryan was added to the WrestleMania main event after defeating Triple H in the opening match of the show. Bryan would ultimately win the triple threat match at WrestleMania XXX, forcing Batista to tap out and winning the WWE World Heavyweight Championship in the process.

The next night on Raw, Batista and Orton teamed together to face The Usos for the WWE Tag Team Championships, but the match ended in a no contest due to both teams being counted out. Later that night, Batista and Orton, along with Kane, attacked Bryan before he was set to defend his title against Triple H. Before Triple H could defeat Bryan, The Shield interrupted by spearing Triple H and taking out Batista, Orton and Kane, causing Bryan to retain his title via disqualification. On the April 14 edition of Raw, Batista, Triple H and Randy Orton came down to the ring to attack The Shield after their 11-on-3 handicap match, using the name and the theme of Evolution. At Extreme Rules, Evolution lost to The Shield. At Payback, Evolution lost to The Shield again. On June 2 edition of Raw, Batista (kayfabe) quit WWE after Triple H denied him a shot at the WWE World Heavyweight Championship; this was done to write Batista off WWE TV so he could promote Guardians of the Galaxy.

In December 2014, Batista announced he was retiring from professional wrestling. In January 2015, WWE announced Batista had signed a Legends contract.

On October 16, 2018, Batista again united with the rest of Evolution. This was for an appearance on SmackDown's 1000th episode.[25]

In August 2007, Batista was said to have used anabolic steroid after an ESPN article released the names of wrestlers that bought medication from Signature Pharmacy of Orlando.[33] Batista denied this and was said to be very mad because of the report. He denied ever being a cutomer of Signature, and stated that he has been "tested regularly by the WWE, and I am in full compliance with the WWE Wellness Program."[34] The WWE punished ten wrestlers named in the issue, though Batista was not one of them.[35]