The idea behind the Royal Rumble match is credited to Pat Patterson.[5] Before the match begins, the contestants draw spots in the Rumble.[1] The match consists of thirty men, beginning with the two men who chose entry numbers one and two in the ring.[1] At regular timed intervals, usually ninety seconds, one of the remaining 28 wrestlers enters the ring.[1] Participants must eliminate all other opponents, and the winner of the event is the last wrestler remaining after all others have been eliminated.[1][4]

Similar to a Battle Royal, a wrestler is eliminated when thrown over the top rope, with both feet touching the floor.[1][2][6] A referee, who is seated at ringside, must see an elimination in order for it to be valid.[7] A wrestler who is eliminated without a referee noticing may sometimes sneak back into the match. For example, Stone Cold Steve Austin was eliminated during the 1997 event, but he re-entered without the referees' seeing and eventually won the match.[7] A wrestler who leaves the ring without going over the top rope is not eliminated from the match. During the 1999 Rumble match, both Vince McMahon and Steve Austin left the ring, only to return later in the match.[8] In the 1994 match, the last two wrestlers, Bret Hart and Lex Luger were declared co-winners when it was decided that both of their feet touched the floor at the same time.[9] A similar situation occurred in the 2005 match, however the match was restarted after Batista and John Cena eliminated each other at the same time. Batista eliminated Cena afterwards to win the match.[10]

The Royal Rumble match is usually at the top of the card.[19] However, it is not always the case, as the 2006 event had the match in the middle of the pay-per-view.[19]

The first Rumble match featured only twenty men,[20] and it was called the Rumble Royale.[16] It lasted about 33 minutes of the 2-hour broadcast.[14] Today, Rumble matches are much longer, with the longest match, at the 2002 event, lasting over 1 hour and 9 minutes of a 3-hour pay-per-view.[14]

With the brand extension introduced in mid-2002, the 30 entrants from 2003 to 2006 had 15 wrestlers from both the RAW and SmackDown! brands. At first, the winner of the match received a shot at his brand's champion.[21] Starting in 2004, the Rumble winner had the option of challenging either brand's champion.[12] For instance, Chris Benoit switched brands in 2004 and won the World Heavyweight Championship.[12] The 2007 Royal Rumble marked the first year participants from the ECW brand competed along with the RAW and SmackDown! brands.[22] The winner of the Royal Rumble now has the option to challenge for the ECW World Championship as well.[13] 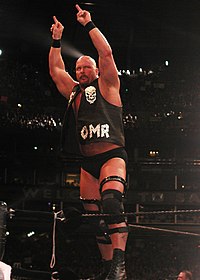 On March 13, 2007, WWE released a full DVD box-set called Royal Rumble: The Complete Anthology, which showcases every Royal Rumble event in its entirety.[24]