Bret Hart (born July 2, 1957) is a semi-retired Canadian Professional wrestler, writer, and actor. He is a member of the well-known Hart wrestling family of Calgary, Alberta. He is considered to be one of the most technically sound wrestlers ever.[1][2] His athletic ability and in-ring knowledge have also been highly praised.[2] 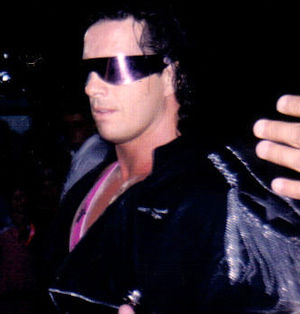 Bret Hart had an amazing career in the WWF, having some of the greatest matches of all time.[3] Some of his best matches were against Mr. Perfect, his one-time brother-in-law British Bulldog, his brother Owen Hart, Stone Cold Steve Austin and Shawn Michaels.[4]

Hart said that he was going to leave the WWF for the companies then biggest competitor, World Championship Wrestling (WCW) and he refused to lose the title in front of his Canadian fans to Michaels. During Survivor Series 1997 in Montreal, Quebec, a real-life screwjob took place when Shawn Michaels put Hart in Hart's own finishing move, the Sharp Shooter. Vince McMahon ordered referee Earl Hebner to call for the bell even though Hart didn't submit. This made Michaels become the WWF Champion.[5] This incident would later become known as the Montreal Screwjob.

Hart retired after being kicked in the head by his opponent, Goldberg, in a match. Soon after he suffered a stroke. He has since partially recovered and has done some stage acting. He wrote a column for The Calgary Sun until 2004.

On January 4 2010, Hart returned to the WWE to be a special guest host for Raw. This was the first time that Hart made a live appearance on Raw in over 12 years. During the night he and Shawn Michaels agreed to a truce, shook hands and hugged. Many fans didn't know if it was real or not but Hart and Michaels later said that their truce was real and not part of a storyline.[6] He also shook hands with Vince but Vince later kicked Hart in the gut which was part of a storyline. Hart along with his family beat Vince McMahon at WrestleMania XXVI in a No Holds Barred Match.

1Hart co-won the Royal Rumble with Lex Luger after both simultaneously eliminated each other.