This article lists the many types of matches in professional wrestling.

A singles match is a match between two wrestlers. The first person to either win by pinfall or submission is the winner. If one of the wrestlers get disqualified, or "counted out" (when a wrestler is caught outside of the ring and the referee counts to either 10 or 20, depending on the companies' rules) they will lose the match.

There are also different types of singles matches such as:

An Empty arena match is a hardcore match which takes place in an arena that has no fans in it. The only people that are there are the wrestlers, referee, and cameramen. One of the first known empty arenas matches took place in 1981 at the Mid South Coliseum in Memphis, Tennessee between Terry Funk and Jerry Lawler. Another well known empty arena match happened between The Rock and Mankind and was shown during the halftime show of Super Bowl XXXIII.[1]

A Falls Count Anywhere match is a match where a pinfall can happen anywhere in the arena. Weapons are usually legal. The types of matches often go in to the audience, the hallways and backstage areas.

A Handicap match is a match where one wrestler or a team compete against a team of wrestlers with a higher number (for example; two against one, three against two, etc.) Usually it is the babyfaces wrestlers that are outnumbered by the heel wrestlers. Sometimes in two-on-one Handicap matches, the team acts under tag team rules.

An Iron Man match is a match where there is a set time limit and is also a multiple-fall match. The way to win the match is to have the most points by the end of the time limit. To gain a point, the wrestler must pin or submit their opponent. A point can also be gained by countout or disqualification.

A Tag Team match is a match between four wrestlers divided in to teams of 2. One wrestler of each team stands just outside the ring ropes until he is tagged in by his partner by slapping hands or lightly slapping their partners back with the ref watching. This match is won by pinfall or submission.

A Triple Threat match is regular match but with three competitors instead of two. First person to score a pinfall or submission wins.

This match includes four wrestlers competing against each other at once. The match continues as the wrestlers are eliminated one by one by pinfall or submission until there is only one left which is then the winner.

A barbed wire steel cage match is a type of cage match where barbed wire is a part of the match's design. There are different variations of the match like a Razor wire Steel Cage Match which is the same except that razorwire replaces the barbed wire and it would wrap around the top, corners, and walls of the cage.

A First Blood match is a match where there are no disqualifications. To win the match, a wrestler must make their opponent bleed.

A Last Man Standing match is a match where a wrestler has to hurt their opponent enough to where he cannot make it to his feet before the count of 10, the one who cannot meet the count loses. There are no pinfalls or submission, no disqualifications, no count outs.

A No Disqualification match is a match where the wrestlers cannot be disqualified and can use weapons and outside interference. Unlike the regular hardcore match, the pinfalls/submissions must be made in the ring.

A Taipei Deathmatch is a match where the fists of the wrestlers are taped. The wrestlers then dip their fists in super glue and broken glass. The way to win the match is by either Pinfall, Submission or Escape.

A Ladder match is a match where a prize is hung above the ring, usually a championship belt or a briefcase with a contract inside. To win you must climb a ladder and retrieve the prize. Weapons are legal in this match type.

A tables, ladders and chairs match (usually abbreviated to TLC) is a match where tables, ladders and steel chairs can be used as weapons. The first TLC match took place at SummerSlam in 2000 between Edge and Christian, The Dudley Boyz and The Hardy Boyz.

A bloodied Kane inside a current style WWE steel cage.

Hell in a Cell match

The Hell in a Cell structure

A Hell in a Cell match is a match which takes place in a large cage which covers beyond the ring apron is lowered around the ring and leaves a small gap between the edge of the ring and the cage wall. It also covers the top of the cage hence the name 'cell'. There is no disqualification and wrestlers are allowed to go outside the cell.

During the early Hell in a Cell matches, many wrestlers got injured. A famous moment happened in 1998 at King of the Ring when The Undertaker threw Mankind off the 16-foot (5 m) high cell through the Spanish announcers table.[2] Undertaker also chokeslammed Mankind through the roof of the cell onto a thumbtack-covered mat in the same match. 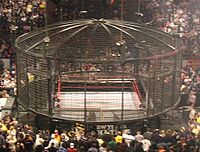 An Elimination Chamber match is a match which takes place in a large, circular steel cage that surrounds the entire ring. The chamber contains four clear, plexiglass pods which holds four of the six wrestler in the match. A pod opens every five minutes to let another wrestler into the match. A wrestler can be eliminated from the match by either pinfall or submission. The wrestler that either gets a pinfall or submission of the last two remaining competitors is the winner. The match was created by Triple H and was introduced by Eric Bischoff in November 2002.[3]

An Inferno match is a type of match where the ring is completely surrounded by flames when both of the wrestler have entered the ring. The way to win the match is for a wrestler to set their opponent on fire. The match usually ends on the outside so that the paramedics can help the loser of the match. The first inferno match took place at Unforgiven in 1998 where The Undertaker defeated Kane.

A Buried alive match is a match where there is a grave dug out of dirt found outside the ring. The way to win the match is for a wrestler to throw their opponent into the grave and bury them in dirt. There are usually shovels, wheelbarrows or bulldozers to help with the burying.