Providence is the capital and the most populous city of Rhode Island. It was one of the first cities established in the United States.[1] It is located in Providence County. It is the third largest city in the New England region. In the 2010 census, the city proper population was 178,042.[2] The area is the 37th largest metropolitan population in the country, with an estimated MSA population of 1,600,856. This is more people than the population of Rhode Island due to the area reaching into southern Massachusetts.[3][4][5] Providence is at the mouth of the Providence River, at the head of Narragansett Bay. The city's small footprint is crisscrossed by streets at odd angles and has a rapidly changing distribution of residents.

Providence was founded in 1636 by Roger Williams, a religious exile from the Massachusetts Bay Colony. He named the area in honor of "God's merciful Providence" which he believed was responsible for revealing such a haven for him and his followers to settle. The official name of the state includes the name of the city, Rhode Island and Providence Plantations. After being one of the first cities in the country to industrialize, Providence became noted for its jewelry and silverware industry. Today, the City of Providence is home to eight hospitals and seven institutions of higher learning, which has shifted the city's economy into service industries, although it still retains significant manufacturing activity.

From colonial times to the mid-19th century, the Rhode Island General Assembly rotated meetings between the state's five county court houses. After 1853 the state legislature stopped meeting at the Kent, Washington and Bristol county courthouses, but continued to alternate its sessions between Providence State House and the Newport State House in Newport. Early in the 20th century, Providence became the only capital of the state.

On September 21, 1938, a severe Category 3 hurricane struck Providence and nearby areas. Providence was flooded with storm surge.[6][7] Another hurricane hit the region in September 1944 near the Connecticut-Rhode Island border.[8] Ten years later, Hurricane Carol struck the area as a Category 2 hurricane, bringing severe storm surge and wind to the Providence area. The storm killed 17 in Rhode Island.[9]

I-95 runs from north to south through Providence. I-195 connects the city to eastern Rhode Island and southeastern Massachusetts, including New Bedford, Massachusetts, and Cape Cod. I-295 encircles Providence while RI 146 provides a direct connection with Worcester, Massachusetts. The city's Iway project is moving I-195 to free up land and to reunify the Jewelry District with Downcity Providence. I-195 currently separates these two neighborhoods.[10] The project is estimated to cost $446 million and be completed in 2012.[11] 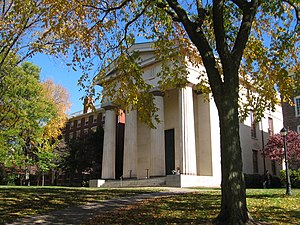 Hope College and Manning Hall at Brown University
The flagship campuses of five of Rhode Island's colleges and universities are in Providence (city proper):