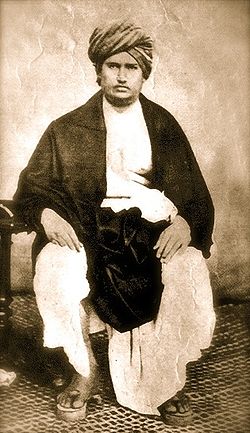 An 1874 photograph of Dayananda Saraswati

pronunciation (info • help) (Hindi: स्वामी दयानन्द सरस्वती, Gujarati: મહષિૅ દયાનંદ સરસ્વતી Maharshi Dayānand Sarasvatī) born (12 February 1824 – 30 October 1883),[1] at Tankara[2] was an important Hindu religious leader of his time.[3] He was the founder of the Arya Samaj, a Hindu reform movement of the Vedic tradition. He was a scholar of Vedic lore and Sanskrit language. He was the first to give the call for Swarajya as "India for Indians" in 1876.[4]

Maharshi Dayananda taught the doctrine of Karma (Karmasiddhanta in Hinduism) and Reincarnation (Punarjanma in Hinduism). He emphasized the Vedic ideals of brahmacharya (celibacy) and Bhakti (devotion to God). He promoted equal rights for women. This included the right to education and reading of Indian scriptures. He was against child marriage.[5] He was also against idol worshipping and animal sacrifice. He spoke out against other religions, especially Islam and Christianity. He felt they were out to destroy the Hindu faith.[3]