Demetria Devonne Lovato (born August 20, 1992) is an American singer, songwriter, and actor. They were first in Barney & Friends (2002–2004), but became more popular from being in the television movies Camp Rock (2008) and its sequel Camp Rock 2: The Final Jam (2010). One of the songs on the first Camp Rock movie was "This Is Me", which they sang with Joe Jonas. This song was popular and was in the Billboard Hot 100.

Lovato's parents divorced in the late summer of 1994, shortly after their second birthday.[15] Lovato's father was of Mexican, Indigenous Mexican, Jewish, Portuguese and Spanish descent,[16] and their mother is of Italian, English, Scottish and Irish ancestry.[17][18] Patrick's patrilineal great-grandmother, Maria Cristina Perea, was a daughter of Civil War Union veteran Francisco Perea (1830–1913) and a great-granddaughter of Santa Fe de Nuevo México governor Francisco Xavier Chávez.[19][20][21] They received their high-school diploma through homeschooling in April 2009.[22] They began playing piano at age seven and guitar at ten,[23] when they also began dancing and acting classes.[24] Lovato told Ellen DeGeneres that they were bullied so badly that they asked for homeschooling.[25]

Lovato released her third album, Unbroken, on September 20, 2011.[30] Begun in July 2010, the album experimented with R&B and featured less pop rock.[31] The album and the stylistic change received mixed to positive reviews from critics, who saw a growth in musicianship because of her struggles and have praised Lovato's vocals but found the music more generic than her previous efforts.[32] The record was a commercial success, peaking at number four on the Billboard 200, with sales exceeding 97,000 copies in its first week of release, and going on to sell over 500,000 copies in the United States, being certified Gold.[33]

The album's lead single, "Skyscraper", was acclaimed for its messages of self-worth and confidence,[34] peaked at number 10 on the Billboard Hot 100, selling 176,000 downloads during the first week of release, becoming Lovato's highest first week sales, until the release of "Heart Attack" by Lovato in 2013.[35] The song also Lovato's highest-peaked single since "This Is Me" reached number nine in August 2008.[35] The song also debuted at number two on the Hot Digital Songs chart.[36] "Skyscraper" received the Best Video with a Message award at the September 2012 MTV Video Music Awards.[37] The album's second and final single, "Give Your Heart a Break", peaked Billboard Hot 100 at number 16, making Lovato's fourth highest peaking song.[38] Also, it has peaked at number 12 on the US Adult Top 40 chart, number 1 on the US Pop Songs chart and became the longest climb by a female artist to #1 in the Pop Songs chart history. In April 2014, the song was certified three-times platinum by the RIAA; as of October 2014, it has sold 2.1 million digital copies.[39]

Lovato released her fourth studio album, Demi, on May 14, 2013.[40] It became a top-three album in the US.[41] The album’s first single, "Heart Attack", reached number ten on the Billboard Hot 100. The next two singles, “Neon Lights” and “Really Don’t Care” with British singer Cher Lloyd, reached the top 40 and were both certified platinum.

Her fifth studio album, Confident, was her first album to have a Parental Advisory label. It entered the Billboard 200 album chart at number two[41] and was released on October 16, 2015.[42] Confident became her first album issued through Island Records and Safehouse, a label they formed with singer-actor Nick Jonas. The first single from Confident, “Cool for the Summer”, reached number 11 on the Billboard Hot 100. It was certified platinum in the US and became her first top-ten hit in the UK. The single “Confident” was performed at the 2016 Democratic National Convention in Philadelphia in support of Hillary Clinton. “Stone Cold” was issued as the third single from Confident. The album gave Lovato her first Grammy Award nomination when it was nominated for Best Pop Vocal Album.

Lovato released her sixth studio album, Tell Me You Love Me, on September 29, 2017.[43] It opened at number three on the Billboard 200 album chart in the US.[41] It featured the single “Sorry Not Sorry”, which became her highest-charting song in the US when it reached number six on the Hot 100. It also reached number nine in the UK. Lovato performed this song at the 2017 MTV Video Music Awards. The promotional singles “Tell Me You Love Me” and “You Don’t Do It for Me Anymore” were also released from the album.

Lovato released their sixth studio album, Dancing with the Devil… the Art of Starting Over, on April 2, 2021.[44]

In 2007 and 2008, Lovato played Charlotte Adams on the Disney Channel short series As the Bell Rings.[45] Lovato auditioned for the channel's television film Camp Rock and series Sonny with a Chance during the summer of 2007, and got both parts.[46] Lovato played the lead character, aspiring singer Mitchie Torres, in Camp Rock.[47] The film premiered on June 20, 2008 to 8.9 million viewers.[48]

Lovato's Disney Channel sitcom Sonny with a Chance, with their character Sonny Munroe the newest cast member of the show-within-a-show So Random!, premiered on February 8.[49] Lovato's acting ability was described by Robert Lloyd of the Los Angeles Times as "very good", and he compared them favorably to Hannah Montana star (and friend) Miley Cyrus.[50] That June, they co-starred as Princess Rosalinda with Selena Gomez in the Disney Channel film, Princess Protection Program. The film, the third highest-rated Disney Channel original movie, premiered to 8.5 million viewers.[51]

In May Lovato guest-starred as a teenage schizophrenic in the sixth-season Grey's Anatomy episode, "Shiny Happy People".[52] Critics praised their versatility.[53]

Camp Rock 2: The Final Jam, with Lovato reprising their role as Mitchie Torres, premiered on September 3, 2010.[54][55] The film premiered to eight million viewers, the number-one cable-television movie of the year by the number of viewers.[56] 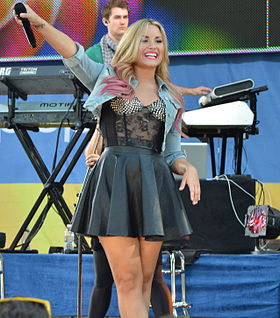 That month Lovato also announced their departure from Sonny with a Chance, putting their acting career on hiatus and ending the series;[57] they later said that they would return to acting when they felt confident doing so.[58] Their departure led to the spin-off series So Random! with the Sonny cast, featuring sketches from the former show-within-a-show. The series was cancelled after one season.[59]

In May, they became a judge for the second season of the American version of The X Factor, with a reported salary of one million dollars.[60] Joining Britney Spears, Simon Cowell and L.A. Reid,[61] it was speculated that they were chosen to attract a younger audience.[62] Mentoring the Young Adults category, their final act (CeCe Frey) finished sixth.[63] At the Minnesota State Fair in August, Lovato announced that after a pre-show performance at the 2012 MTV Video Music Awards[64] they would release a single by December.[65] On December 24, they released a video on their YouTube account of themselves singing "Angels Among Us" dedicated to the victims of the Sandy Hook Elementary School shooting.[66] In March they were confirmed as returning for The X Factor's third season,[67] with their salary reportedly doubling.[68]

Lovato has an eating disorder[69] and has been diagnosed with bipolar disorder. Lovato’s father, Patrick, died of cancer on June 22, 2013, at age 53.[70][71] On October 17, 2017, Lovato released a YouTube documentary called Demi Lovato: Simply Complicated, in which they described their teenage use of cocaine and performing on American Idol while hungover. Lovato considers having the right support system to be lifesaving.[72]

On May 19, 2021, Lovato announced that they were gender nonbinary and their shift to using singular they pronouns.[74]

On July 24, 2018, the Los Angeles Police Department arrived at Lovato's home for Lovato suffering an alleged drug overdose.[75] They were later revealed to be in stable condition.[76]

In 2021, Lovato said that they had multiple health problems because of the overdose, including multiple strokes, a heart attack, and brain damage, which caused vision problems.[77]