The eastern hemisphere of Earth, highlighted in yellow. 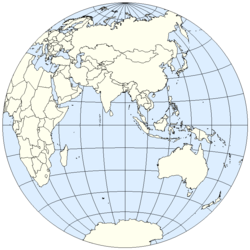 The Eastern hemisphere is a geographical term for the half of the Earth that is east of the Prime Meridian and west of the 180th Meridian. It is the opposite of the Western hemisphere. It can be also used to describe Europe, Asia, Australia, Africa and Oceania.

This short article about a place or feature can be made longer. You can help Wikipedia by adding to it.
he:המיספירה#חצי הכדור המזרחי