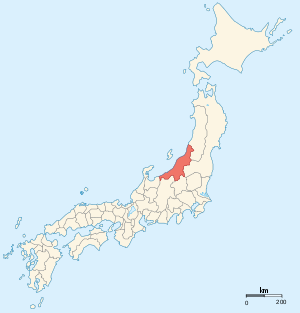 Script error: No such module "Nihongo". was an old province in Japan in the area of Niigata Prefecture on the island of Honshū.[1]

The province had borders with Uzen, Iwashiro, Kōzuke, Shinano, and Etchū Provinces.

In the Meiji period, the provinces of Japan were converted into prefectures. The maps of Japan and Echigo Province were reformed in the 1870s.[2]

Echigo faced the Sea of Japan.

Iyahiko jinju and Koko jinja were the chief Shinto shrines (ichinomiya) of Echigo.[3]