Etchū Province (越中国, Etchū no kuni?) was an old province of Japan in the area of Toyama Prefecture on the island of Honshū.[1] Along with Echizen and Echigo Provinces, it was sometimes called Esshū (越州?).

The province had borders with Echigo, Shinano, Hida, Kaga, and Noto provinces.

The capital city of the province was Takaoka. 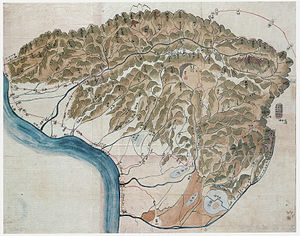 The Noto Peninsula and Noto Province was separated from Etchū during the reign of Empress Genshō.[2]

In the Meiji period, the provinces of Japan were converted into prefectures. The maps of Japan and Etchū Province were reformed in the 1870s.[3]