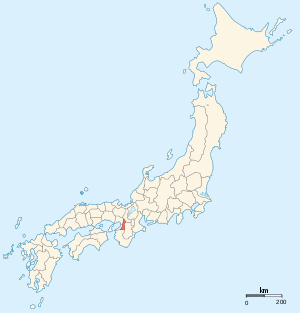 Script error: No such module "Nihongo". was a old province of Japan in the area of Osaka Prefecture on the island of Honshū.[1]

Kawachi province was established in the 7th century. In the 8th century, Izumi was separated from the older province during the reign of Empress Genshō.[2]

In the Meiji period, the provinces of Japan were converted into prefectures. Maps of Japan and Kawachi Province were reformed in the 1870s.[3]

Hiraoka jinja was the chief Shinto shrine (ichinomiya) of Kawachi. [4] The shrine is located in Higashiōsaka.