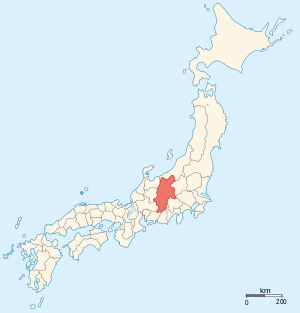 The ancient capital city of the province was near Matsumoto.

The boundaries of Mutsu were formally established during the reigns of Empress Genshō and Empress Kōken.[2]

In 713, the road between Mino Province and Shinano Province was widened. There were increasing numbers of travelers on this road.[3]

In the Meiji period, the provinces of Japan were converted into prefectures. Maps of Japan and Shinano Province weres reformed in the 1870s.[4]

Suwa taisha was the chief Shinto shrine (ichinomiya) of Shinano. [5]