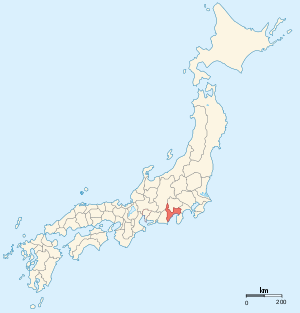 Suruga had borders with Izu, Kai, Sagami, Shinano, and Tōtōmi provinces. The province had access to the Pacific Ocean at Suruga Bay. 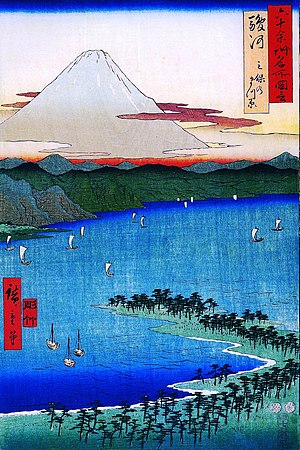 Suruga was one of the original provinces of Japan. It was established in the Nara period as part of the Taihō Code reforms.

During the Kamakura period, Suruga was controlled by the Hōjō clan.

In the Edo period, the Tōkaidō road was the main route between the Imperial capital at Kyoto and the main city of the Tokugawa Shogunate. The road passed through Suruga.[2]

Tokugawa Ieyasu lived in Sumpu Castle in Suruga when he retired from the role of Shōgun.[3] He died at Sunpu.[4]

After the Meiji Restoration of 1868, the last Tokugawa Shōgun, Tokugawa Yoshinobu retired to Suruga.[3]

In the Meiji period, the provinces of Japan were converted into prefectures. The maps of Japan and Izu Province were reformed in the 1870s.[6] Being located near Mt. Fuji made Suruga a popular place to make maps during the Meiji period.[7]

Sengen jinja was the chief Shinto shrine (ichinomiya) of Suruga. [8]