Tōtōmi Province (遠江国, Tōtōmi-no kuni?) was an old province of Japan in the area of Shizuoka Prefecture.[1] It is also known as Enshū (遠州?).

The province had borders with Mikawa, Suruga and Shinano Provinces. 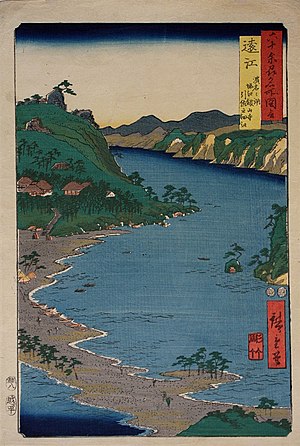 Tōtōmi was one of the original provinces of Japan established in the Nara period under the Taihō Code.

In the Edo period, the Tōkaidō road was the main route between Kyoto and Edo. The road passed through Tōtōmi.[2]

In the Meiji period, the provinces of Japan were converted into prefectures. The maps of Japan and Izu Province were reformed in the 1870s.[3]

Oguni jinja and Kotonomamahachimangū were the chief Shinto shrines (ichinomiya) of Tōtōmi.[4]