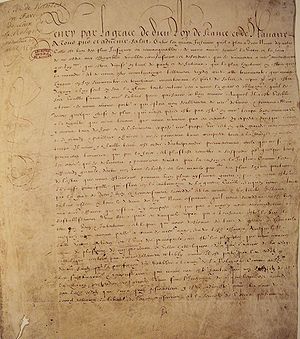 The Edict of Nantes was a law that allowed people to be Protestants in France from 1598 to 1685. It was signed in Nantes by King Henry IV in April 1598, although some provinces blocked it until 1610. The purpose of the law was to make peace after the French Wars of Religion. Henry IV was a former Huguenot (French Protestant) who had changed his religion to being Catholic so that he could be the king of France.

The edict was an early example of freedom of religion in Europe. However, it did not make Catholics and Protestants equal. It said that the Catholic Church was the national religion of France. It only allowed people to be Protestants in certain areas, where they were allowed to defend their own fortress towns. They also still had to pay money to the Catholic Church and have Catholic holidays. Many Catholics in France hated the idea of allowing people to be Protestant, while the Protestants thought that it did not go far enough.

The Edict of Nantes was weakened during the reign of King Louis XIII, with many of the fortress towns being captured by the government. In 1685, King Louis XIV replaced the Edict of Nantes with the Edict of Fontainebleau, which banned people from being Protestant.[1] This made many Huguenots leave the country, and a hundred years later there were not many left. In 1787, King Louis XVI made it legal for people to be Protestant again. During the French Revolution a few years later, France gave people full freedom of religion.

The government declared that no one could believe in any religion except Roman Catholicism. Anyone joining in a Protestant service could die.[2] Because of this, many Huguenots died for their faith. Some, though, gave up and became Roman Catholics. Others, refusing to stop being Protestants, ran away from France.

Louis XIV was horrified when he lost the Huguenots. They were among the most skilled workers in France. Many bankers, weavers, and merchants were Huguenots. Louis XIV ordered that France's borders be closed, and said that nobody could leave the country without his permission.[2] However, Protestants still found ways to escape. Some hid in barrels on ships sailing away from France.[2] Others disguised themselves as peasants and escaped. All together, probably more than two hundred thousand Huguenots ran away.[2]

Protestant countries in Europe were glad to have such hard-working subjects: over a third of the Huguenots went to the Netherlands. From there many of them went to the Dutch colony at the Cape of Good Hope.[2] Many went to England, and from there to America, especially Virginia and the Carolinas.

These immigrants were very valuable to their new home countries. They were hard working, obedient, and talented. They also brought many secrets of French manufacturing with them:[2] for example, they introduced silk production to the rest of Europe.[2]