Eisleben is a town in Saxony-Anhalt, Germany. It is famous as the hometown of Martin Luther; because of this, its official name is Lutherstadt Eisleben. In 2015, Eisleben had a population of 24,198.

Eisleben has two parts old town and new town (Altstadt and Neustadt). The new town was created for Eisleben's miners in the 14th century.

Eisleben was the capital of the district of Mansfelder Land and is the seat of the Verwaltungsgemeinschaft ("collective municipality") Lutherstadt Eisleben. 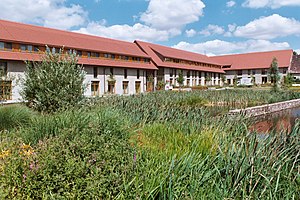 In 1229, the Counts of Mansfield started a convent for women. At first, it was on the grounds of their castle. Then they built a separate convent at Helfta near Eisleben, which opened in 1258. It was governed under either the Benedictine or Cistercian model. It became known for its powerful and mystical abbesses, including Gertrude of Hackeborn, Gertrude the Great and Mechtild. However, Duke Albrecht of Brunswick destroyed the convent in 1342. It was rebuilt the next year. It closed in 1524, but later reopened on a smaller scale until 1542

In 1542, it came under the control of local farmers. In 1712 it became a farm run by the Prussian state. In 1994, the Catholic Diocese of Magdeburg bought the property and began restoring the building. Cistercian nuns from Seligenthal in Bavaria moved in starting in approximately 1999.[1]

The Protestant reformer Martin Luther was born in Eisleben on November 10, 1483. His father, Hans Luther, was a miner. Luther's family moved to Mansfeld when he was only a year old; he lived in Wittenberg most of his life. Luther preached his last sermon and died in Eisleben in 1546.

In 1997, Eisleben's "Birth House" and "Death House" were added to the World Heritage List. Also, Luther was baptised in Eisleben's St. Peter and Paul Church. He preached his last sermons at St. Andreas Church.

The population has been declining since the mid-1960s due to declining birth rates and people moving away.[2] The municipal area has been enlarged several times by merging with neighboring districts.[3]