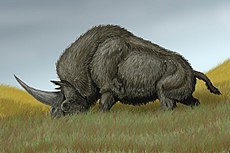 Elasmotherium is an extinct giant rhinoceros.

It lived from 2.6 million years ago (mya) to about 50,000 years ago. Fossils have been found in Europe and Asia.[1] This giant lived and grazed on the Eurasian steppes (grasslands).

Elasmotherium was a heavily-built quadruped that walked on four hoofed legs. Its legs were longer than those of other rhinos and were adapted for galloping, giving it a horse-like gait.

It probably had a large horn on its forehead, but fossils of the horn have not been found. The teeth were tall-crowned and were covered with cement and wrinkled enamel. Its mouth at the front was a beak; there are no teeth in front of the molars.