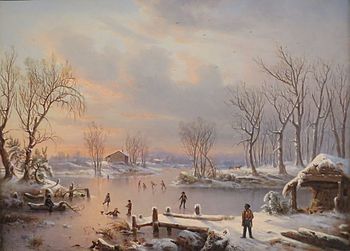 Elizabeth is a city in Union County, New Jersey, United States. As of the 2010 United States Census, the city had a total population of 124,969.[1] It is New Jersey's fourth largest city.[2] In 2008, Elizabeth was named one of "America's 50 Greenest Cities" by Popular Science magazine, the only city in New Jersey selected.[3] The Elizabeth River runs into Newark Bay in Elizabeth.

Elizabeth was founded in 1665 by English settlers and originally called "Elizabethtown". It was part of the Elizabethtown Tract. The town was named for Elizabeth, wife of governor George Carteret.[4] The town served as the first capital of New Jersey.[5] During the American Revolutionary War, there were over a hundred battles and skirmishes fought in and around Elizabeth.[6]

The Singer Sewing Machine Company was the first major industry in Elizabeth. They had up to 2,000 workers. In 1895, one of the first car companies opened. This was the Electric Carriage and Wagon Company. They were soon joined by another electric car builder, Andrew L. Riker. The Electric Boat Company got its start building submarines for the United States Navy in Elizabeth. The first boat to launch was the USS Holland (SS-1) in 1897.[9] Elizabeth grew in parallel to the larger city of Newark for many years. But Elizabeth has been more successful in retaining a middle class presence and was spared riots in the 1960s.