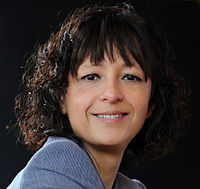 Emmanuelle Marie Charpentier (born 11 December 1968) is a French researcher of microbiology, genetics and biochemistry. She is known for her work in CRISPR gene editing.

From 2015 she was a director at the Max Planck Institute for Infection Biology in Berlin. In 2018, she founded an independent research institute, the Max Planck Unit for the Science of Pathogens.

In 2020, Charpentier and Jennifer Doudna were awarded the Nobel Prize in Chemistry "for the development of a method for genome editing".[1]

Charpentier was born in Juvisy-sur-Orge, Île-de-France.