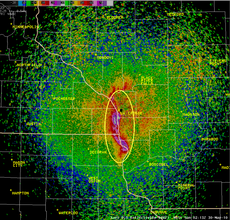 Mayflies are insects which belong to the Order Ephemeroptera (from the Greek ephemeros = ephemeral, or short-lived; pteron = wing). The name refers to the most distinctive features of the adults. They are in an ancient group of insects, the Palaeoptera, ('Ancient wings') with dragonflies and damselflies.[1]

At mating the female lays her eggs in the water.[2] They settle to the bottom where they stick to rocks, vegetation or the bottom of the stream. They range in size by the particular species of Mayfly. Depending on temperature, the eggs take from a few days to a year to develop: usually it is one to three months.[2] During this embryonic stage the mouth, legs, tail and organs all develop.[2]

Mayfly are insects whose aquatic larvae (called naiads or nymphs) live from several months up to a year, in freshwater.[2] The naiads go through 20 or 30 moults as they develop.

Mayflies are unique in that they moult one more time after getting functional wings (this is known as the alate stage). This second-to-last winged stage is usually very short, lasting from 30 minutes to one day, depending on the species. The function of the adult imago is reproduction and dispersal; they do not eat. The stage is a favorite food of many fish, and many 'fishing flies' are modeled on them.

It often happens that all the mayflies in a population mature at once (called the hatch). For a day or two in the Spring or Autumn (Fall), mayflies will be everywhere, dancing around each other in large groups, or resting on every available surface.[3] The adults have various special features. Their rear wings are small or almost vestigial; the males have two long front legs for holding females, the rest have no function. Mating is usually in mid-air. The mayfly are quite a successful group. About 2,500 species are known worldwide, including about 630 species in North America.[4] The hatch at La Crosse, Wisconsin has been a news event for several years. The hatch is so large it appears on weather radar.[5] The emerging mayflies land on everything and cover some areas like snow.[5]